Switch back to the old search page.Advanced Search
Planning worship? Check out our sister site, ZeteoSearch.org, for 20+ additional resources related to your search.
Showing 21 - 30 of 36Results Per Page: 102050

1808 - 1859 Person Name: Friedrich Layriz, 18081-1859 Meter: 8.8.8 with alleluias Harmonizer of "GELOBT SEI GOTT" in Common Praise Friedrich (also: Fridrich) Christoph Ludwig Eduard Layriz (also: Layritz, Lairitz, * January 30 1808 in Nemmersdorf, today part of Goldkronach, † March 18 1859 in Unterschwaningen ) was a German Lutheran pastor and Hymnologist. Friedrich Layriz came from a Franconian family, went to school in Bayreuth and studied Protestant theology at the universities of Leipzig and Erlangen. In Erlangen, he was influenced by the Erlanger theology to Christian Krafft and Georg Karl von Raumer. He was pastor from 1837 to 1842 he provided the second Parochial ministry in the St. St. John's Church in Hirschlach, then from 1842 as pin preacher in St. Georgen (Bayreuth). In 1846 he was named after a literary quarrel with the priest Elias Sittig to the future Bavarian Hymns transferred to Unterschwaningen. Layriz' importance lies in the collection and rediscovery of Lutheran chorales from the time before the Enlightenment theology, which were widely heavily revised or completely forgotten, and their original polyrhythmic melodies. In 1844 he published the programmatic core of the German hymn of Luther to Gellert with 450 hymns, the major influence on the song book design in Bavaria (1854), Germany and should have in the German-speaking Lutherans in North America. The collection and subsequently by Layriz published chorale books were certainly not historical-critical editions, but for practical use. Therefore, there are also additions and alterations by Layriz therein, such as the until now sung in Protestant churches verses 3 and 4 of "Es ist ein Ros sprung" (EC 30). In the area of liturgy Layriz worked. He conducted research on the service in the Age of Reformation and was responsible for the musical aspect of the liturgy of Wilhelm Lohe. http://de.wikipedia.org/wiki/Friedrich_Layriz See also in: Wikipedia
Friedrich Layritz

1893 - 1973 Person Name: Ernest MacMillan, 1893- Meter: 8.8.8 with alleluias Arranger (with Faux Bourdon) of "VULPIUS" in The Hymnary of the United Church of Canada Ernest MacMillan (Conductor) Born: August 18, 1893 - Mimico, Canada Died: May 6, 1973 - Toronto, Canada The eminent Canadian conductor and composer, Sir Ernest (Alexander Campbell) MacMillan, began his organ studies with Arthur Blakeley in Toronto at age 8, making his public debut at 10. He continued his organ studies with A. Hollins in Edinburgh from 1905 to 1908, where he was also admitted to the classes of F. Niecks and W.B. Ross at the University. Ernest MacMillan was made an associate (1907) and a fellow (1911) of London’s Royal College of Organists, and in 1911 received the extramural Bachelor of Music degree from the University of Oxford. He studied modern history at the University of Toronto from 1911 to 1914, before receiving piano instruction from Therese Chaigneau in Paris in 1914. In 1914 he attended the Bayreuth Festival, only to be interned as an enemy alien at the outbreak of World War I. While being held at the Ruhleben camp near Berlin, he gained experience as a conductor. He was awarded the B.A. degree in absentia by the University of Toronto in 1915. His ode, England, submitted through the Prisoners of War Education Committee to the University of Oxford, won him his Doctor of Music degree in 1918. After his release, Ernest MacMillan returned to Toronto as organist and choirmaster of Timothy Eaton Memorial Church from 1919 to 1925. In 1920 he joined the staff of the Canadian Academy of Music, and remained with it when it became the Toronto Conservatory of Music, serving from 1926 to 1942 as its principal. He was also dean of music faculty at the University of Toronto from 1927 to 1952. Ernest MacMillan was conductor of the Toronto Symphony Orchestra from 1931 to 1956, and of the Mendelssohn Choir there from 1942 to 1957. He also appeared as guest conductor in North and South America, Europe, and Australia. He served as president of the Canadian Music Council from 1947 to 1966, and of the Canadian Music Centre from 1959 to 1970. In 1935 he was the first Canadian musician to be knighted, an honour conferred upon him by King George V. He also received honorary doctorates from Canadian and USA institutions. He conducted many works new to his homeland, both traditional and contemporary. --www.bach-cantatas.com/
Sir Ernest MacMillan 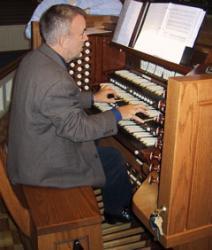 b. 1946 Meter: 8.8.8 with alleluias Composer of "PETER AND CORNELIUS" in The Song Lingers On
John D. Horman

1883 - 1958 Person Name: G. K. A. Bell, 1883-1958 Meter: 8.8.8 with alleluias Author of "Christ is the King!" in The Book of Praise George Kennedy Allen Bell was born in 1883. He was educated at Westminster School and Christ Church, Oxford. He was chaplain to the archbishop of Canterbury in 1914, was appointed as Dean of Canterbury in 1924 and became the Anglican bishop at Chichester in 1929. He was interested in ecumenism and friendship between the Anglican Church and churches in other countries and was instrumental in starting the World Council of Churches. He was also interested in religious drama and the integration of arts in the church. Dianne Shapiro, from Lambeth Palace Library archives
G. K. A. Bell

1900 - 1985 Meter: 8.8.8 with alleluias Author of "Become to Us the Living Bread" in Chalice Hymnal Miriam Drury (1900-1985) was a native of California and lived there most of her life. Her husband was a faculty member at San Francisco Theological Seminary. After retirement, she lived in Monte Vista Presbyterian Retirement Home, Pasadena, California. Her hymn "Walk Tall, Christian" was also included in The Worshipbook (1970). Drury composed many complete hymns (words and music), anthems, and poems for both children and adults. She was an award-winning composer for the Hymn Society of America and a number of her hymns were published by the society. The Presbyterian Hymnal Companion 1993 ============================= Miriam Drury (Mrs. Clifford Merrill Drury) is a native of California where she has lived most of her life. Her home is in Pasedena. She has long been interest in writing stories, poems and songs for children as well as articles for adults. She is the author and composer of many Sunday School and Grade School songs. --Ten New Hymns on the Ministry, 1966. Used by permission.
Miriam Drury

Person Name: James Minchin 1942- Meter: 8.8.8 with alleluias Composer of "THE STRIFE IS O'ER" in The Australian Hymn Book with Catholic Supplement
James Minchin