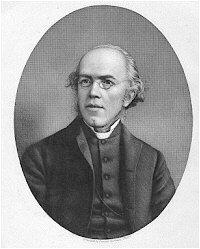 Whitfield, Frederick, B.A., son of H. Whitfield, was born at Threapwood, Shropshire, Jan. 7, 1829, and educated at Trinity College, Dublin, where he took his B.A. in 1859. On taking Holy Orders, he was successively curate of Otley, vicar of Kirby-Ravensworth, senior curate of Greenwich, and Vicar of Stanza John's, Bexley. In 1875 he was preferred to St. Mary's, Hastings. Mr. Whitfield's works in prose and verse number upwards of thirty, including Spiritual unfolding from the Word of Life; Voices from the Valley Testifying of Jesus; The Word Unveiled; Gleanings from Scripture, &c. Several of his hymns appeared in his Sacred Poems and Prose, 1861, 2nd Series, 1864; The Casket, and Quiet Hours in the Sanctuary. The hymn by which he is most widely known is I need Thee, precious Jesu.” Other hymns by him in common use include:~
1. I have a Great High Priest above. Christ the High Priest.
2. I saw the Cross of Jesus. The Cross.
3. In spirit, Lord, we meet Thee now. Missions. This was written at the request of the Committee of the Irish Church Missions for one of their annual meetings in London.
4. Jesus, Thou Name of magic power. The Name of Jesus. Sometimes given as "Jesus, Thou Name of power divine."
5. The sprinkled blood is speaking. The Blood of Christ.
6. There is a day I long to see. Heaven Anticipated.
7. There is a Name I love to hear. The Name of Jesus. Published in 1855 in hymnsheets and leaflets in various languages. From this the hymn “Jesus, the Name I love so well" is taken.
8. There's naught on earth to rest upon. God Unchangeable.
9. When dead in sin and far from God. Redemption.
All these hymns, with the exception of No. 3, are in his Sacred Poems and Prose, 1861, and several of them have been printed as leaflets, and set to special music. The Sacred Poems, &c, contains 26 hymns, some of which are of considerable merit.