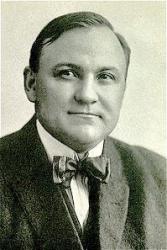 Rader was one of the most powerful evangelistic preachers of the early 20th Century. He described himself as an ex-bellboy, ex-cowboy, ex-prospector, ex-football player, and ex-pugilist.

He was pastor of Moody Church in Chicago, Illinois (1915–21), and followed founder Albert Simpson as president of the Christian and Missionary Alliance (1920–23). He also founded the Chicago Gospel Tabernacle in 1922 and pastored it for 11 years.

Rader wrote many Gospel song lyrics and a few tunes, and was instrumental in founding of the Tabernacle Publishing Company.

Rader was a pioneer of Christian broadcasting, as well: In the early 1920’s, the beginning days of radio, station WBBM in Chicago, Illinois, closed every Sunday. Rader received permission to use the studios, and for several years ran a 14-hour Christian program every Sunday. Rader called his station within a station WJBT (Where Jesus Blesses Thousands).

Daniel Paul Rader (August 24, 1879 – July 19, 1938) was an influential evangelist in the Chicago area during the early 20th century and was America's first nationwide radio preacher. He was senior pastor of the renowned Moody Church from 1915 to 1921 and was also the second president of the Christian and Missionary Alliance. Rev. Rader also published a novel, , which was about Hollywood as the sin center of America. Rader's great-nephew, also named Paul Rader, served as General of the Salvation Army, and President of Asbury University.
Wikipedia Biography
TextsTunesHymnals