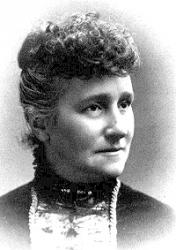 As a young girl Phoebe Palmer Knapp (b. New York, NY, 1839; d. Poland Springs, ME, 1908) displayed great musical talent; she composed and sang children’s song at an early age. The daughter of the Methodist evangelist Walter C. Palmer, she was married to John Fairfield Knapp at the age of sixteen. Her husband was a founder of the Metropolitan Life Insurance Company, and after his death, she shared her considerable inherited wealth with various charitable organizations. She composed over five hundred gospel songs, of which the tunes for “Blessed Assurance” and “Open the Gates of the Temple” are still popular today.

Phoebe Palmer Knapp (March 9, 1839 – July 10, 1908) was an American composer of music for hymns and an organist.
Wikipedia Biography
TextsTunesHymnals