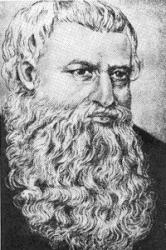 Herman, Nicolaus, is always associated with Joachimsthal in Bohemia, just over the mountains from Saxony. The town was not of importance till the mines began to be extensively worked about 1516. Whether Herman was a native of this place is not known, but he was apparently there in 1518, and was certainly in office there in 1524. For many years he held the post of Master in the Latin School, and Cantor or Organist and Choirmaster in the church. Towards the end of his life he suffered greatly from gout, and had to resign even his post as Cantor a number of years before his death. He died at Joachimsthal, May 3, 1561. (Koch, i. 390-398; Allgemeine Deutsche Biographie, xii. 186-188, &c.)

He was a great friend and helper of J. Mathesius (q.v.) (who in 1532 became rector of the school, but in 1541 diaconus and in 1545 pastor of the church), and it was said that whenever Mathesius preached a specially good sermon Herman straightway embodied its leading ideas in a hymn. His hymns, however, were not primarily written for use in church, but were intended for the boys and girls in the schools, to supplant profane songs in the mouths of the young men and women, or for the daily life of the “housefathers and housemothers" in Joachimsthal, at home, and in their work in the mines. He is a poet of the people, homely, earnest, and picturesque in style; by his naiveté reminding us of Hans Sachs. He was an ardent lover of music and a very good organist. The chorales which he published with his hymns are apparently all of his own composition, and are among the best of the Reformation period.

Many of Herman's hymns soon passed into Church use in Germany, and a number are found in almost all books in present use. About 190 in all, they appeared principally in:—