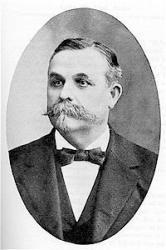 James McGranahan USA 1840-1907. Born at West Fallowfield, PA, uncle of Hugh McGranahan, and son of a farmer, he farmed during boyhood. Due to his love of music his father let him attend singing school, where he learned to play the bass viol. At age 19 he organized his first singing class and soon became a popular teacher in his area of the state. He became a noted musician and hymns composer. His father was reluctant to let him pursue this career, but he soon made enough money doing it that he was able to hire a replacement farmhand to help his father while he studied music. His father, a wise man, soon realized how his son was being used by God to win souls through his music. He entered the Normal Music School at Genesco, NY, under… Go to person page >
^ top

None But Christ Can Satisfy

All texts published with NONE BUT CHRIST^ top

James McGranahan (b. Adamsville, PA, 1840; d. Kinsman, OH, 1907) first published NONE BUT CHRIST in his Sacred Songs and Solos (1883) as the setting for the anonymous text "O Christ, in Thee My Soul Hath Found." NONE BUT CHRIST is a dynamic tune; because three of the lines open as a fanfare, brass accompaniment would be very fitting. Keep the accompaniment strong and brisk on the repeated soprano notes.

Of Scottish-Irish descent, McGranahan grew up on the family farm, and his father expected him to become a farmer. Because he wanted to study music, McGranahan hired another person to do the farm work while he earned his own money for music study. He attended William Bradbury's (PHH 114) Normal Music School at Geneseo, New York, conducted singing schools in Pennsylvania and New York, and taught at and managed George F. Root's (PHH 93) Normal Musical Institution for three summers. In 1877 he became a song leader for evangelist Major D. W. Whittle (PHH 495) and toured England and the United States; their association lasted some eleven years. A fine singer himself, McGranahan was one of the first to use male choruses in evangelistic crusades. He published The Gospel Male Choir (1878, 1883) and served as editor and compiler of numerous collections, including Gospel Hymns and Sacred Songs, No. 3-6 (1878-1891) with Ira D. Sankey (PHH 73) and George Stebbins (PHH 63).

Text: None But Christ