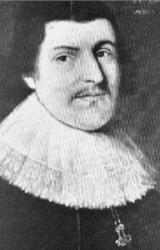 Here, O my Lord, I see Thee face to face

Most glorious Lord of Life that on this day

Filled with the Spirit's Power

FARLEY CASTLE, composed by Henry Lawes (b. Dinton, Wiltshire, England, 1596; d. London, England, 1662), was first published in treble and bass parts as a setting for Psalm 72 in George Sandys's Paraphrase upon the Divine Poems (1638). In the British tradition the tune is used as a setting for Horatius Bonar's communion hymn "Here, O My Lord, I See Thee," but now the tune is also often set to Peacey's text.

Lawes was a well-known composer, singer, and teacher in seventeenth-century England. His teaching career began with his appointment as music tutor to the daughters of the Earl of Bridgewater. Later he was a voice teacher to professional singers. In 1631 he was appointed musician in the court of Ring Charles I; he lost this position during Cromwell's reign but was reappointed at the Restoration. Lawes was known as a composer of some four hundred songs, many of which were used in stage productions. He and John Milton (PHH 136) collaborated on the famous masque Comus (1634). The writer of about twenty anthems, including one for the coronation of Charles II in 1660, Lawes also contributed tunes to George Sandys' Psalms (1638) and to Choice Psalms put into Musick for three Voices (1648), which he published with his brother. Lawes' tunes were reintroduced to modern hymnody when Ralph Vaughan Williams (PHH 316) included five of them in The English Hymnal (1906).

FARLEY CASTLE has a rather angular contour; its active harmony is suited to part singing. Use light accompaniment and a measured pace for this prayer hymn.

Text: Most Glorious Lord of Life

Ancient and Modern #633b