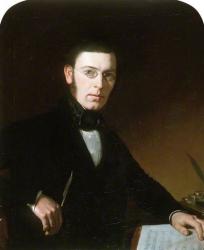 Who Is This, So Weak and Helpless

All texts published with EIFIONYDD^ top

John Ambrose Lloyd (b. Mold, Flintshire, Wales, 1815; d. Liverpool, England, 1874) [composed] EIFIONYDD. The tune...appeared in Ieuan Gwyllt's (John Roberts's) important tune book Llyfr Tonau Cynulleidfaol (1859). Largely self-taught, Lloyd was a major presence in the Welsh music scene of his day. He was an adjudicator at the National Eisteddfodan (singing festival) in Wales and at other choral festivals and was founder of the Welsh Choral Union of Liverpool. Lloyd composed three cantatas, including The Prayer of Habakkuk, and published two collections of hymn tunes: Casgliad o Donau (1843) and Aberth Moliant (1870).

Joseph Parry (PHH 18) judged EIFIONYDD the best hymn tune by a Welsh composer. The tune is named after a district in North Wales famous for its poets during the nineteenth century. In rounded bar form (AABA') and in minor tonality, the tune is eminently suited to part singing, though that may be reserved for stanza 3b and stanza 4. The final stanza could conclude with a Picardy third (a raised third on the final chord). Another option (unusual, but not unheard of with other Welsh tunes) is to shift to G major for the entire fourth stanza! That may require a bit of practice on the part of the organist and choir, however, and should follow only a suitable interlude that indicates clearly the change to major tonality.

Text: Who Is This, So Weak and Helpless?