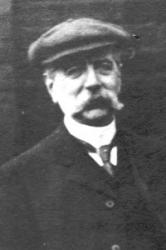 Born: March 5, 1852, Burnley, Lancashire, England. Died: October 1938, Burnley, Lancashire, England. Buried: Burnley, Lancashire, England. Son of Richard and Jane Holmes, Henry’s father and great grandfather were both solicitors; his father had offices in Colne and Burnley. Henry was educated at Clitheroe Royal Grammar School. In 1875, he became an Attorney for Common Law and was admitted a Solicitor of the High Court of Chancery. He was articled to his father in November 1869, and practiced in Burnley for over 60 years, first in partnership with his brother Richard Marmaduke as Holmes and Holmes. He continued to practice on his own as Holmes and Holmes after his brother’s death in 1894, and later as Messrs. Holmes, Butterfield and… Go to person page >
^ top

To thee and to thy Christ, O God

To Thee and to Thy Christ, O God,
We sing, we ever sing;
For He the lonely wine-press trod,
Our cup of joy to bring.
His glorious arm the strife maintained,
He marched in might from far;
His robes were with the vintage stained,
Red with the wine of war.

All texts published with CHARLEVILLE^ top

Hymns of Consecration and Faith #355

Tune Title: CHARLEVILLE First Line: To Thee and to Thy Christ, O God Date: 1964
Hymns of Faith #16
All instances^ top
Suggestions or corrections? Contact us