We Know that Christ Is Raised 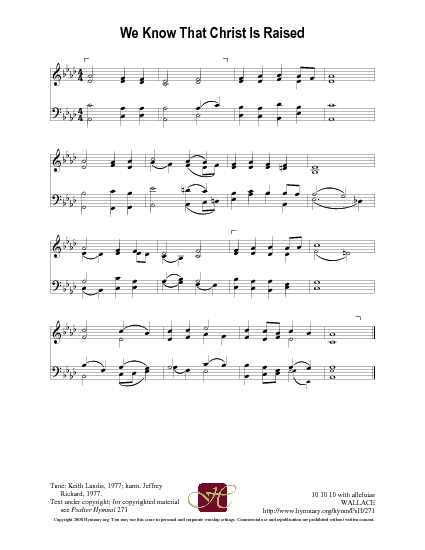 We know that Christ is raised and dies no more

The author, John B. Geyer, writes:

“We Know That Christ Is Raised" was written in 1967, when I was tutor at Cheshunt College, Cambridge, U.K At that time a good deal of work was going on 'round the corner (involving a number of American research students) producing living cells ("the baby in the test tube"). The hymn attempted to illustrate the Christian doctrine of baptism in relation to those experiments.

John B. Geyer (b. Wakefield, Yorkshire, England, 1932) is an Old Testament scholar who has written widely in his field. He wrote a commentary on The Wisdom of Solomon (1973) as well as a number of hymns that were first published in various British supplementary hymnals. Educated at Queen's College, Cambridge, and Mansfield College, Oxford, he also studied Old Testament under Gerhard von Rad in Heidelberg. In 1959 Geyer was ordained in the Congregational Union of Scotland. He served as a chaplain at the University of St. Andrews, pastor of Drumchapel Congregational Church in Glasgow, Scotland, and a college tutor. In 1969 Geyer became minister in the (now) United Reformed Church in Little Baddow. Since 1980 he has served as pastor at Weoley Hill, Birmingham, and as chaplain at the University of Birmingham, England.

The text was first published in the British Methodist supplementary hymnal Hymns and Songs (1969) but has since been altered in various other hymnals, including the Psalter Hymnal. The controlling thought comes from Romans 6:3-5, in which Paul teaches that in baptism we are united with Christ in his resurrection–that is the basis for our new life. Like 269, this song ends each stanza with a note of praise–in this case with an "alleluia" refrain line.

Charles V. Stanford (b. Dublin, Ireland, 1852; d. Marylebone, London, England, 1924) composed ENGELBERG as a setting for William W. How's "For All the Saints" (505). The tune was published in the 1904 edition of Hymns Ancient and Modern with no less than six different musical settings. It is clearly…

All tunes published with 'We Know that Christ Is Raised'^ top