Twas on that night, when doomed to know 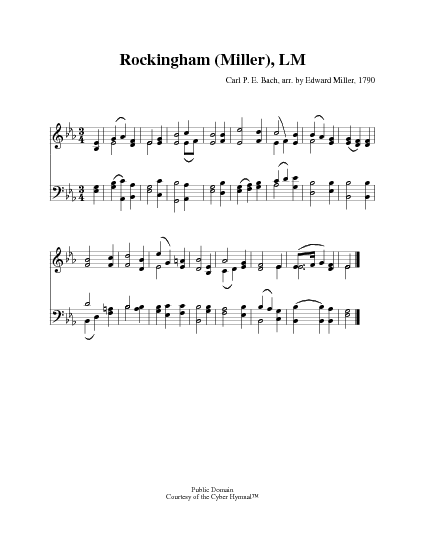 'Twas on that night, when doomed to know

1 'Twas on that night when doomed to know
the eager rage of ev'ry foe,
that night in which he was betrayed,
the Savior of the world took bread.


2 And after thanks and glory giv'n
to him that rules in earth and heav'n,
that symbol of his flesh he broke,
and thus to all his foll'wers spoke:


3 "My broken body thus I give
for you, for all. Take, eat, and live.
And oft the sacred rite renew
that brings my saving love to view."


4 Then in his hands the cup he raised,
and God anew he thanked and praised,
while kindness in his bosom glowed,
and from his lips salvation flowed.


5 "My blood I thus pour forth," he cries,
"to cleanse the soul in sin that lies;
in this the covenant is sealed,
and heav'n's eternal grace revealed.


6 "With love to man this cup is fraught;
let all partake the sacred draught;
through latest ages let it pour,
in mem'ry of my dying hour."

"Then taking in his hands the cup,
To Heav'n again he thanks sent up."

The rewriting of these lines was the only change made in the public worship edition issued in that year to the Church of Scotland, and still in use. The hymn bears a close resemblance to a Latin hymn, beginning, "Nocte qua Christus rabidis Apellis" (Private Prayers, p. 405, Parker Society, 1851, quoted in full in the notes to the larger edition of the Free Church Hymn Book, 1882), by Andreas Ellinger, who was born 1526 at Orlamünde, on the Saale, a little above Jena, and d. March 12, 1582, at Jena, where he had become Professor of Medicine in 1569. Mr. William Bonar, of London, considered it a translation from Ellinger by William Archibald (ordained parish minister of Unst, Shetland, in 1735, d. there March 7, 1785), and that Archibald's text was altered by Morison for the Translations and Paraphrases. In the markings by the eldest daughter of W. Cameron, it is ascribed to Morison. It is very generally used in Scotland as a Communion hymn. Included in Burgess & Money's Psalms & Hymns, 1857; Common Praise, 1879; Church Praise, 1883, and other collections; and in full and unaltered, as No. 35 in the Free Church Hymn Book, 1882. The resemblance to Watts's "'Twas on that dark and doleful night," in his Hymns, 1709, Bk. iii., No. 1, often referred to, is but slight. [Rev. James Mearns, M.A.]

Edward Miller (b. Norwich, England, 1735; d. Doncaster, Yorkshire, England, 1807) adapted ROCKINGHAM from an earlier tune, TUNEBRIDGE, which had been published in Aaron Williams's A Second Supplement to Psalmody in Miniature (c. 1780). ROCKINGHAM has long associations in Great Britain and North Amer…

All tunes published with 'Twas on that night, when doomed to know'^ top

Great Songs of the Church (Revised) #367