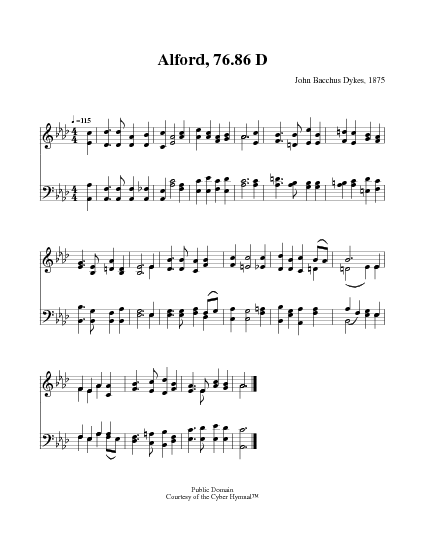 1 Ten thousand times ten thousand
In sparkling raiment bright,
The armies of the ransomed saints
Throng up the steeps of light:
'Tis finished, all is finished,
Their fight with death and sin;
Fling open wide the golden gates,
And let the victors in.


2 What rush of alleluias
Fills all the earth and sky!
What ringing of a thousand harps
Bespeaks the triumph nigh!
O day, for which creation
And all its tribes were made;
O joy, for all its former woes
A thousandfold repaid!


3 O then what raptured greetings
On Canaan's happy shore!
What knitting severed friendships up,
Where partings are no more!
Then eyes with joy shall sparkle
That brimmed with tears of late,
Orphans no longer fatherless,
Nor widows desolate.


4 Bring near Thy great salvation,
Thou Lamb for sinners slain;
Fill up the roll of Thine elect,
Then take Thy power and reign;
Appear, Desire of nations,
Thine exiles long for home;
Show in the heavens Thy promised sign;
Thou Prince and Savior, come.

Alford, Henry, D.D., son of  the Rev. Henry Alford, Rector of Aston Sandford, b. at 25 Alfred Place, Bedford Row, London, Oct. 7, 1810, and educated at Trinity College, Cambridge, graduating in honours, in 1832. In 1833 he was ordained to the Curacy of Ampton. Subsequently he held the Vicarage of Wymeswold, 1835-1853,--the Incumbency of Quebec Chapel, London, 1853-1857; and the Deanery of Canterbury, 1857 to his death, which took. place  at  Canterbury, Jan. 12, 1871.  In addition he held several important appointments, including that of a Fellow of Trinity, and the Hulsean Lectureship, 1841-2. His literary labours extended to every department of literature, but his noblest undertaking was his edition of the Greek Testament, the result… Go to person page >
^ top

Henry Alford (PHH 527) was Dean of Canterbury Cathedral when he wrote this text. Designating it for the twenty-first Sunday after Trinity, he published the three-stanza text in the magazine Good Words in March 1867 and later that same year in his Year of Praise. A fourth stanza was added when the hymn was reprinted in The Lord's Prayer Illustrated, prepared by Pickersgill and Alford in 1870. The Psalter Hymnal includes the revised, three-stanza version found in Hymns for Today’s Church (1982).

A noted New Testament scholar, Alford drew his imagery for this text about the church triumphant from John's Revelation. Stanza 1 portrays the "ten thousand times ten thousand" angels who praise the victorious Lamb upon the throne and who are then joined by the "countless voices" of all creatures praising God (see Rev. 5:11-13). The second stanza is an exclamation of joy and comforting anticipation of the final victory of God's saints. Stanza 3 is a "Maranatha" prayer, which urges Christ to come quickly and usher in the consummation of his glorious kingdom ("Desire of Nations" is an Old Testament name for the Messiah; see Hag. 2:7).

Liturgical Use:
Advent; with eschatological preaching; other occasions of worship when a "Maranatha" hymn is appropriate.

Hymns of the Christian Life #403

The Song Book of the Salvation Army #167