On the Mountain's Top Appearing 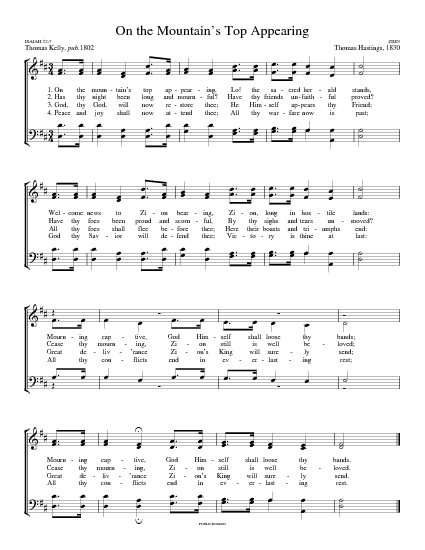 On the mountain's top appearing

Kelly, Thomas, B.A., son of Thomas Kelly, a Judge of the Irish Court of Common Pleas, was born in Dublin, July 13, 1769, and educated at Trinity College, Dublin. He was designed for the Bar, and entered the Temple, London, with that intention; but having undergone a very marked spiritual change he took Holy Orders in 1792. His earnest evangelical preaching in Dublin led Archbishop Fowler to inhibit him and his companion preacher, Rowland Hill, from preaching in the city. For some time he preached in two unconsecrated buildings in Dublin, Plunket Street, and the Bethesda, and then, having seceded from the Established Church, he erected places of worship at Athy, Portarlington, Wexford, &c, in which he conducted divine worship and preached. H… Go to person page >
^ top

T. Kelly.
"God, thy God will now restore thee:
He Himself appears thy friend:
All thy foes shall flee before thee,
Here their boasts and triumphs end;
Great deliverance
Zion's King vouchsafes to send."

T. Cotterill.
"Lo! thy sun is risen in glory!
God Himself appears thy friend;
All thy foes shall flee before thee;
Here their boasted triumphs end:
Great deliverance
Zion's King vouchsafes to send.”

When these two forms of the hymn are taken into account, its use is found to be extensive. Cotterill's text has been rendered into Latin by B. Bingham in his Hymnologia Christiana Latina, 1871, as "Stat ecce! in altis montibus jam nuncius."

Henry T. Smart (PHH 233) composed REGENT SQUARE for the Horatius Bonar (PHH 260) doxology "Glory be to God the Father." The tune was first published in the English Presbyterian Church's Psalms and Hymns for Divine Worship (1867), of which Smart was music editor. Because the text editor of that hymna…

All tunes published with 'On the Mountain's Top Appearing'^ top