Lord, keep us steadfast in Thy word 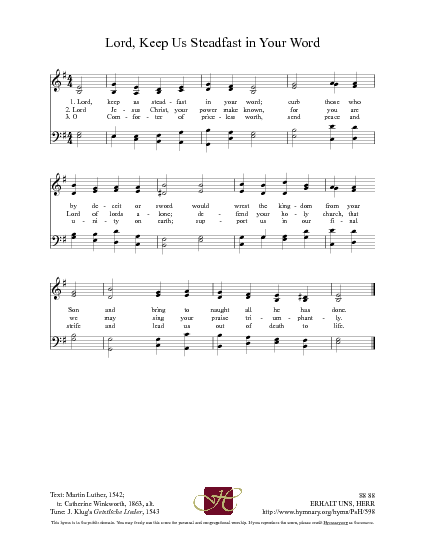 Lord, keep us steadfast in Thy Word

1 Lord, keep us steadfast in your Word;
curb those who by deceit or sword
would seek to overthrow your Son
and to destroy what he has done.


2 Lord Jesus Christ, your pow'r make known,
for you are Lord of lords alone;
defend your Christendom that we
may sing your praise eternally.


3 O Comforter of priceless worth,
send peace and unity on earth;
support us in our final strife
and lead us out of death to life.

Catherine Winkworth (b. Holborn, London, England, 1827; d. Monnetier, Savoy, France, 1878) is well known for her English translations of German hymns; her translations were polished and yet remained close to the original. Educated initially by her mother, she lived with relatives in Dresden, Germany, in 1845, where she acquired her knowledge of German and interest in German hymnody. After residing near Manchester until 1862, she moved to Clifton, near Bristol. A pioneer in promoting women's rights, Winkworth put much of her energy into the encouragement of higher education for women. She translated a large number of German hymn texts from hymnals owned by a friend, Baron Bunsen. Though often altered, these translations continue to be used i… Go to person page >
^ top

In 1541 the Turkish army was threatening to take Vienna. The German rulers called for special prayers for safety from these Islamic forces. Martin Luther (PHH 336) responded to this request by writing the original German text ("Erhalt uns, Herr, bei deinem Wort") for a prayer service in Wittenberg. Convinced that the church was threatened not only by the Turkish army of Sultan Suleiman but also by the Roman Catholic Pope, Luther began his text as follows (English translation):

Lord, keep us in thy Word and work,
Restrain the murderous Pope and Turk,
Who fain would tear from off thy throne
Christ Jesus, thy beloved Son.

After these threats to the church subsided, the text was altered: it eliminated the reference to the Pope and Turk and referred generally to all enemies of the Word. The text was published in Low German in the Magdeburg Gesangbuch (1542) and in High German in Joseph Klug's Geistliche Lieder (1543). The English translation by Catherine Winkworth (PHH 194) was published in her Chorale Book for England (1863).

The text is a fervent prayer in song cast into a Trinitarian mold. As we sing, we pray that God the Father will keep his kingdom from the powers of evil (st. 1), that God the Son will rule the church (st. 2), and that God the Spirit will bring peace and unity on earth and will support us in our "final [earthly] strife," the doorway to eternal life (st.3).

Liturgical Use:
In times of war and persecution that affect us or, perhaps more commonly, in solidarity with other people who experience such turmoil; as a prayer hymn before the proclamation of God's Word; peace services.

All tunes published with 'Lord, keep us steadfast in Thy word'^ top