In God the Father I Believe

In God the Father I believe, almighty Lord of all

Audio files: MIDI
Representative text cannot be shown for this hymn due to copyright.
To see the text, purchase a flexscore. 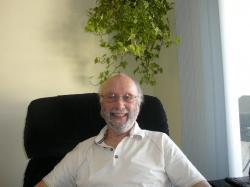 Frank DeVries was born in 1929 in Langsa, Indonesia. He grew up in Holland, emigrated to Canada in 1952, and in 1953 married Celia, his childhood sweetheart. He and his wife are the parents of six children, two of which are deceased. After obtaining Royal Conservatory degrees in theory and harmony, Frank and his wife moved to Grand Rapids where Frank graduated from Calvin College in 1962. Upon their return to Canada Frank taught at Pacific Christian School in Victoria, BC, and was principal at the John Knox Christian School in Wyoming, Ontario and the Houston and Vancouver Christian Schools both in BC. The author of two short novels (God. Noun or Verb? in 2006 and Frans in 2008) he has contributed articles to many Christian magazines… Go to person page >
^ top

There are two musical settings of the Apostles' Creed in the Psalter Hymnal: this versification in meter and a prose setting (519). The full text of this ancient creed appears in the Psalter Hymnal on page 813 with a footnote about its "sublime simplicity, unsurpassable brevity, beautiful order, and liturgical solemnity." The Apostles' Creed is also explained in Lord's Days 8-22 of the Heidelberg Catechism.

Frank De Vries (b. Langsa, Sumatra, Indonesia, 1929) wrote this versification of the creed in Houston, British Columbia, Canada, in 1969 after Christian Reformed Church minister Mel Pool suggested that the creed should be sung as well as spoken. De Vries also composed a tune for his text; both were published in Vancouver, British Columbia, in a Shalom Productions booklet, “Believe It, Or…” (1972) and in the second printing of the Psalter Hymnal Supplement (1976).

The four stanzas of "In God the Father" adhere closely to the text of the Apostles' Creed. That fact and the buoyant musical setting undoubtedly account for the hymn's popularity in the Christian Reformed Church and its acceptance in other denominations. A Christian school educator, De Vries served for many years as a principal in several Canadian schools, including fourteen years (1970-1984) as principal of Vancouver Christian School. He has written a number of songs, some of which were published in Tiny Little Spider (1976).

Liturgical Use:
Singing or speaking one of the ancient confessions of faith has been a regular ingredient of public worship since the days of the early church. The Apostles' Creed was historically associated with baptism, the Nicene Creed with the Lord's Supper. The traditional place in historic Christian worship for reciting both creeds was after hearing God's Word–the creed then becomes our response of faith.

Bert Polman (PHH 37) wrote the three-part harmonization for De Vries's CREEDAL SONG in Toronto, Canada, in 1975 (also published in the 1976 Psalter Hymnal Supplement). The tune gets its well-proportioned outline mainly from variations on the opening motive. Sing in unison throughout. Organists may w…

Suggested accompaniment through measure 7, at least for stanzas 2 and 4.

All tunes published with 'In God the Father I Believe'^ top


This is a preview of your FlexScore.
^ top