Holy God, We Praise Thy Name

Holy God, we praise Thy Name

1 Holy God, we praise thy name.
God of all, we bow before thee.
All on earth your scepter claim;
all in heav’n above adore thee.
Infinite thy vast domain,
everlasting is thy reign.


3 Lo! the apostolic train
join thy sacred name to hallow.
Prophets swell the glad refrain,
and the blessed martyrs follow,
and, from morn till set of sun,
through the church the song goes on.


4 Holy Author, Holy Word,
Holy Spirit, three we name thee;
still, one holy voice is heard:
undivided God, we claim thee,
and adoring bend the knee,
while we own the mystery.

Ignaz Franz Poland 1719-1790. Born at Protzau, Silesia, he studied in Glaz andf Breslau. In 1742 he became a Roman Catholic priest. He served as chaplain at Gross-Glogau and vicar of Glogau in Silesia. In 1753 he was appointed archpriest at Schlawa, and assessor to the apostolic vicar's office in Breslau in 1766. He also functioned as the Assessor for Theological Affairs at the Apostolic Vicariate. He wrote hymn lyrics and compiled religious music. His works include “Katholisches Gesangbuch” (1744). He died at Breslau. John Perry  Go to person page > 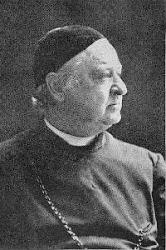 This text is based on the anonymous fourth-century Latin hymn “Te Deum Laudamus," which in one modern English prose translation reads:

We praise you, O God,
we acclaim you as Lord;
all creation worships you,
the Father everlasting.
To you all angels, all the powers of heaven,
the cherubim and seraphim, sing in endless praise:

Holy, holy, holy Lord, God of power and might,
heaven and earth are full of your glory.

Throughout the world the holy Church acclaims you:

Father, of majesty unbounded,
your true and only Son, worthy of all praise,
the Holy Spirit, advocate and guide.

You, Christ, are the king of glory,
the eternal Son of the Father.
When you took our flesh to set us free
you humbly chose the virgin's womb.
You overcame the sting of death,
and opened the kingdom of heaven to all believers.
You are seated at God's right hand in glory.
We believe that you will come to be our judge.

Come then, Lord, and help your people,
bought with the price of your own blood,
and bring us with your saints
to glory everlasting.

A classic text of the church, "Te Deum Laudamus" has been a staple item in many liturgies and is sometimes extended with versicles and responses. It is loved by all traditions of Christendom: Eastern, Roman Catholic, and Protestant. Much of the text consists of liturgical phrases and acclamations, including some from the "Gloria in excelsis Deo" (see 247). Over the centuries many composers have set this text in large choral works; it has been translated and versified into many languages and expressed in numerous hymns.

A German versification of the "Te Deum" ("Grosser Gott, wir loben dich") appeared anonymously in the Katholisches Gesangbuch (Vienna, around 1774) at the request of Empress Maria Theresa of Austria. Four years later that versification was also published by Ignaz Franz (b. Protzau, Silesia, 1719; d. Breslau [Poland], 1790) with small alterations; thus it is attributed to Franz in some modern sources. Franz was a Roman Catholic priest who studied at Glas and Breslau. He held a number of church positions, the longest (1766 until his death) as an assistant in the ecclesiastical court in Breslau. Franz published ten books, the most important a Roman Catholic hymnal, Katholisches Gesangbuch (c. 1774), which contained forty-seven of his hymns.

A rather free English translation of the German and Latin by Clarence A. Walworth b. Plattsburg, NY, 1820; d. Albany, NY, 1900) was published in a Redemptorist Father's hymnal in 1853 and was reprinted in Dublin's Catholic Psalmist in 1858.

Walworth was born into a Presbyterian home. After studying at Union College in Schenectady, New York, he was admitted to the bar in 1841. His interest in theology led to studies for the Episcopalian ministry at General Theological Seminary in New York City, but under the influence of the Oxford Movement he became a Roman Catholic in 1845 and joined the Redemptorist Order. In 1848 he was ordained as "Clarence Alphonsus" at the Redemptorist college in Wittem, the Netherlands. Walworth served as a priest in Troy, New York and in Albany, New York. One of the founders of the Paulist Order, he fought industrial abuses, took up the cause of Native Americans on the St. Regis reservation, and wrote poetry and hymns. He was stricken with blindness during the last ten years of his life. His best-known publication is The Oxford Movement in America (1895).

The Psalter Hymnal includes Walworth's stanzas 1-4, which cover only the first half of the "Te Deum." We and all creation praise our God and Lord (st. 1); all the angels sing their praise to God (st. 2); saints in heaven and the church on earth praise God (st. 3); we praise the triune God (st. 4). The two halves of this part of the "Te Deum" are carefully balanced: stanza 2 ends with the angels' threefold Sanctus; stanza 4 concludes with a Gloria Patri.

Liturgical Use:
An opening hymn at Sunday morning worship services (as is traditional for the 'Te Deum"); an extended doxology for festive occasions.

All tunes published with 'Holy God, We Praise Thy Name'^ top

A New Hymnal for Colleges and Schools #41

Great Songs of the Church (Revised) #48

Hymns for a Pilgrim People #2

Hymns of the Christian Life #6

Hymns to the Living God #6

Praise! Our Songs and Hymns #49

Psalms for All Seasons #149A

The Hymnal for Worship and Celebration #12