The Song of Jubilee 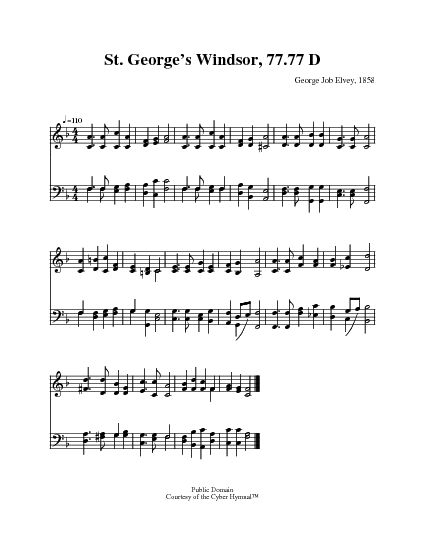 Hark! the song of jubilee

1 Hark, the song of jubilee
loud as mighty thunders roar,
or the fullness of the sea
when it breaks upon the shore;
Alleluia! for the Lord
God omnipotent shall reign!
Alleluia! let the word
sound from city, hill, and plain.


2 Alleluia! hark, the sound
from the depths unto the skies,
wakes above, beneath, around
all creation's harmonies;
see the Victor's banner furled;
sheathed his sword, he speak--"Tis done!"--
and the kingdoms of this world
are the kingdom of his Son.


3 He shall reign from pole to pole
with illimitable sway;
he shall reign when, like a scroll,
yonder heav'ns have passed away;
then the end: beneath his rod
his last enemy shall fall;
Alleuia! Christ in God,
God in Christ, is all in all.

James Montgomery (b. Irvine, Ayrshire, Scotland, 1771; d. Sheffield, Yorkshire, England, 1854), the son of Moravian parents who died on a West Indies mission field while he was in boarding school, Montgomery inherited a strong religious bent, a passion for missions, and an independent mind. He was editor of the Sheffield Iris (1796-1827), a newspaper that sometimes espoused radical causes. Montgomery was imprisoned briefly when he printed a song that celebrated the fall of the Bastille and again when he described a riot in Sheffield that reflected unfavorably on a military commander. He also protested against slavery, the lot of boy chimney sweeps, and lotteries. Associated with Christians of various persuasions, Montgomery supported missio… Go to person page >
^ top

George J. Elvey (PHH 48) composed ST. GEORGE'S WINDSOR as a setting for James Montgomery's text "Hark! The Song of Jubilee," with which it was published in Edward H. Thorne's Selection of Psalm and Hymn Tunes (1858). The tune has been associated with Alford's text since publication of the hymn in th…

All tunes published with 'The Song of Jubilee'^ top