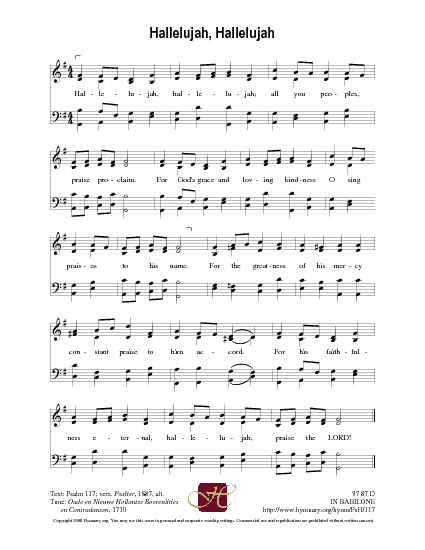 Tune: IN BABILONE
Published in 3 hymnals

1 Hallelujah, hallelujah;
all you peoples, praise proclaim.
For God's grace and loving kindness
O sing praises to his name.
For the greatness of God's mercy
constant praise to him accord.
For God's faithfulness eternal,
hallelujah, praise the LORD!

Source: Psalms for All Seasons: a complete Psalter for worship #117E

A call to all nations to praise the LORD.

The seventh of eight "hallelujah" psalms (111-118), 117 is an expanded "Praise the LORD." It was probably composed for use at the beginning or end of temple liturgies. It stands fifth in the "Egyptian Hallel" used in Jewish liturgy at the annual religious festivals prescribed in the Torah. At Passover, Psalms 113 and 114 were sung before the meal; 115 through 118 were sung after the meal. Psalm 117 is only one stanza in length, but in calling all nations to praise the LORD for being faithful to Israel, it powerfully anticipates the Great Commission (Matt. 28:18-20). Paul quotes verse 1 in Romans 15:11 as proof that the salvation of Gentiles was not a divine afterthought. The versification derives from The Book of Psalms (1871), a text-only psalter that was later published with music in the 1887 Psalter.

Liturgica1 Use:
As an expanded "hallelujah," Psalm 117 has many uses in worship–by itself or possibly as a frame for another hymn.

With Heart and Voice: songs for all God's children #23

Psalms for All Seasons #117E

With Heart and Voice #23