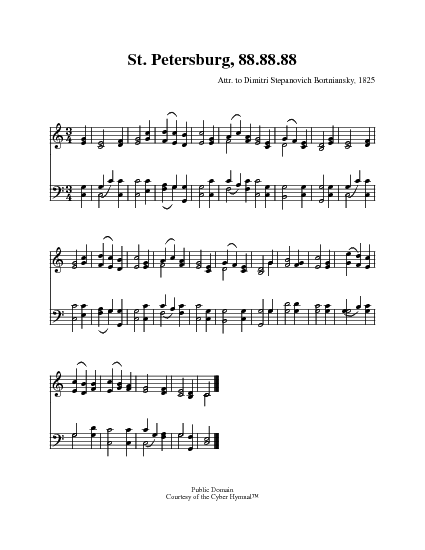 1 Come, O thou Traveler unknown,
whom still I hold, but cannot see!
My company before is gone,
and I am left alone with thee.
With thee all night I mean to stay
and wrestle till the break of day.


2 Wilt thou not yet to me reveal
thy new, unutterable name?
Tell me, I still beseech thee, tell,
to know it now resolved I am.
Wrestling, I will not let thee go
till I thy name, thy nature know.


3 My strength is gone, my nature dies,
I sink beneath thy weighty hand,
faint to revive, and fall to rise.
I fall, and yet by faith I stand;
I stand and will not let thee go
till I thy name, thy nature know.


4 Yield to me now—for I am weak,
but confident in self-despair!
Speak to my heart, in blessing speak,
be conquered by my instant prayer.
Speak, or thou never hence shalt move,
and tell me if thy name is Love.


5 ‘Tis Love! ‘tis Love that wrestled me!
I hear thy whisper in my heart.
The morning breaks, the shadows flee,
pure, universal Love thou art.
To me, to all, thy mercies move—
thy nature and thy name is Love.

Come, O Thou Traveller unknown. C. Wesley. [Prayer.] This poem was first published in Hymns & Sacred Poems, 1742, in 14 stanzas of 6 lines, and entitled "Wrestling Jacob." It is based on the incident in Jacob's life as recorded in Gen. xxxii. 24-32. Although a poem of great power and finish, it is unsuited to Public Worship. I t received the most unqualified praise from I. Watts, who, J. Wesley said, did not scruple to say, "that single poem, Wrestling Jacob, was worth all the verses he himself had written" (Minutes of Conference, 1788); and J. Montgomery wrote of it as:—

"Among C. Wesley's highest achievements may be recorded, "Come, O Thou Traveller unknown," &c., p. 43, in which, with consummate art, he has carried on the action of a lyrical drama; every turn in the conflict with the mysterious Being against whom he wrestles all night, being marked with precision by the varying language of the speaker, accompanied by intense, increasing interest, till the rapturous moment of discovery, when he prevails, and exclaims, “I know Thee, Saviour, Who Thou art.'" (Christian Psalmist, 1825. xxiii.-iv.)

Notwithstanding this high commendation, and of it as a poem it is every way worthy, its unsuitability for congregational purposes is strikingly seen in the fact that it is seldom found in any hymnal, either old or new, except those of the Methodist denominations.