Christ, Above All Glory Seated 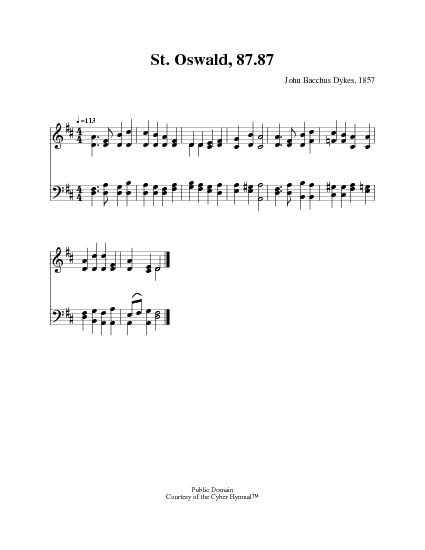 Christ, above all glory seated

1 Christ, above all glory seated,
King triumphant, strong to save!
Dying, you have death defeated,
buried, you have spoiled the grave.
You have gone where now is given
what no mortal might could gain,
on th'eternal throne of heaven
in your Father's pow'r to reign.


2 Then will kingdoms all adore you,
heav'n above and earth below,
while the depths of hell before you
trembling and defeated bow.
We will praise you, Lord and Savior,
and implore your grace and love;
hear our pray'r and help us always
seek the things that are above.


3 Lord, when you again in glory
on the clouds of heav'n shall shine,
we, your church, shall stand before you,
brought from all the days of time.
In your faithfulness confiding,
Jesus, we shall all adore:
praise and glory, thanks and honor,
pow'r and strength forevermore!

In some hymnals, the editors noted that a hymn's author is unknown to them, and so this artificial "person" entry is used to reflect that fact. Obviously, the hymns attributed to "Author Unknown" "Unknown" or "Anonymous" could have been written by many people over a span of many centuries. Go to person page > 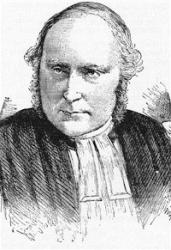 Woodford, James Russell, D.D., was born April 30, 1820, and educated at Merchant Taylors School, and Pembroke College, Cambridge, of which he was a scholar; B.A. Senior Optime, and 2nd class in the Classical Tripos. He was ordained in 1843, and became second Master in Bishop's College, Bristol; and Curate of St. John the Baptist, Broad Street, in that city. He became Incumbent of St. Saviour's, Coalpit Heath, 1845; of St. Mark's, Easton, Bristol, 1848; and Vicar of Kempsford, Gloucestershire, 1855. In 1868 he was preferred by the Crown to the important vicarage of Leeds on Dr. Atlay's appointment as Bishop of Hereford. He was several times Select Preacher at Cambridge. He was also Hon. Chaplain to the Queen (1867). In 1873 he was consecrate… Go to person page >
^ top

Aeterne Rex altissime, Redemptor. [Ascension.] The text of this hymn has been so altered at various times that the true original and the origin of its various forms are most difficult to determine. The researches of the best hymnologists, when summarized, give the following results:
1. Daniel, vol. i. No. 162, gives the text in 7 stanzas of 4 lines and a doxology, from a 13th century manuscript at Wurzburg; interpolating therewith 6 stanzas, which are only found in the Mozarabic Breviary He adds in parallel columns, the revised text of the Roman Breviary 1632.
2. The Roman Breviary form has continued down to and is in use at the present time, as the hymn at Matins for the Ascension-day, and from thence daily till Whitsun Day, unless the Festival of an Apostle or Evangelist interrupts the usual order. It is composed of stanzas i., iii., vi., vii., x., xi.,xii. and xiii., of the old form, somewhat altered. This text is in all modern editions of the Roman Breviary and Card. Newman's Hymni Eccl., 1838 and 1865.
3. We have next the Hymnarium Sarisburiense, Lond., 1851, pp. 101-2, where it is given as the Hymn at Vespers on the Vigil of the Ascension, and daily to Whitsuntide: also at Matins on the Feast of the Ascension itself. Variations are added from the York Breviary, which assigns it to the first and second Vespers of the Ascension,
And throughout the Octave.—-&. Alban's, "to the Ascension of the Lord at Vespers;"— Worcester, "the Ascension of the Lord at Matins," &c. Different readings are also given from a Canterbury manuscript of the Anglo-Saxon times.
4. Mone, No. 171, gives stanzas i.-iv. of the old text from manuscripts of the 14th and 15th century at Karlsruhe. This form he holds is by St. Ambrose. In addition he gives at No. 172, stanzas v.-vii. from manuscripts of the 14th and 15th cenuryt, at Karlsruhe, &c, and holds that they are not by St. Ambrose, and yet by a writer of the 5th cent. The Mozarabic Breviary stanzas he considers to be the work of a Spanish imitator of Prudentius of the 5th century
5. It is also in the Mozarabic Breviary 1502, f. 135; in an 11th cent. manuscript in the British Museum (Jul. A. vi. f. 51); and in another of the same cent. (Vesp. D. xii. f. 756). In the Latin Hymns of the Anglo-Saxon Church, 1851, p. 90, it is printed from a Durham manuscript of the 11th century.
In 1855, Daniel, iv. pp. 79-83, gave an extensive note on this hymn, dealing with its complex authorship, &c. He entered fully and with much feeling into the verbal and metrical questions which led him to oppose some of the opinions of Mone on the authorship, &c, of the hymn. The note is too long for quotation, but may be consulted with advantage. The hymn "Tu Christe nostrum gaudium" is a portion of this hymn. It begins with line 17. [Rev.W. A. Shoults, B. D.]
Translations in common use:—
6. Christ above all glory seated. By Bp. J. R. Woodford, made for and first published in his Hymns arranged for the Sundays, &c, 1852, in 6 stanzas of 4 lines. (2nd edition 1855.) In 1857 it was repeated in Chope's Hymnal; in 1863 and 1875, in the Parish Hymn Book, and also in Society for Promoting Christian Knowledge Psalms & Hymns; Sarum; Church Hymns.; Thring's Collection and others. It is somewhat indebted to Copeland's translation, two or three lines being verbatim therefrom. It is the most popular of all the versions of this hymn.
In Murray's Hymnal, 1852, an attempt was made to represent all the 8 stanzas of the Roman Breviary by compiling a cento thus: stanzas i., ii., iii., Bp. Woodford; stanzas iv., v., vi., Copeland, slightly altered: stanzas vii., viii., Bp. Woodford; but it has gone almost, if not altogether, out of common use.

All tunes published with 'Christ, Above All Glory Seated'^ top