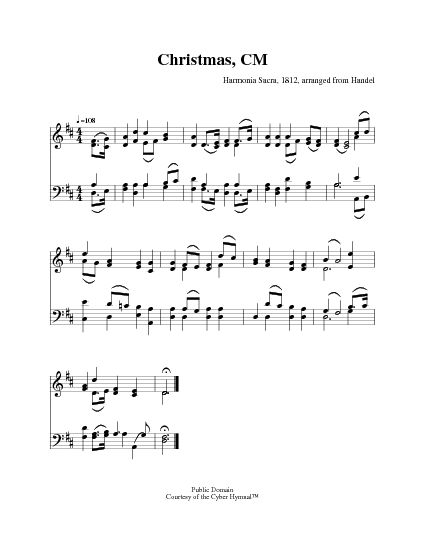 Awake, my soul, stretch every nerve

1 Awake, my soul, stretch every nerve,
And press with vigor on;
A heavenly race demands thy zeal,
And an immortal crown.


2 A cloud of witnesses around
Hold thee in full survey;
Forget the steps already trod,
And onward urge thy way.


3 'Tis God's all-animating voice
That calls thee from on high;
'Tis His own hand presents the prize
To thine aspiring eye.


4 That prize, with peerless glories bright,
Which shall new lustre boast
When victors' wreaths and monarchs' gems
Shall blend in common dust.


5 Blest Savior, introduced by Thee,
Have I my race begun;
And crowned with victory at Thy feet
I'll lay my honors down.

Philip Doddridge (b. London, England, 1702; d. Lisbon, Portugal, 1751) belonged to the Non-conformist Church (not associated with the Church of England). Its members were frequently the focus of discrimination. Offered an education by a rich patron to prepare him for ordination in the Church of England, Doddridge chose instead to remain in the Non-conformist Church. For twenty years he pastored a poor parish in Northampton, where he opened an academy for training Non-conformist ministers and taught most of the subjects himself. Doddridge suffered from tuberculosis, and when Lady Huntington, one of his patrons, offered to finance a trip to Lisbon for his health, he is reputed to have said, "I can as well go to heaven from Lisbon as from Nort… Go to person page >
^ top

Awake, my soul, stretch every nerve. P. Doddridge. [Confirmation.] This hymn is not given in the "D. MSS." It was first published by J. Orton in his edition of Doddridge's Hymns, &c, 1755, No. 296, in 5 stanzas of 4 lines, and entitled "Pressing on in the Christian Race." It was repeated in all subsequent editions of the Hymns, and also in Doddridge's Scripture Hymns, edited by J. Doddridge Humphreys, 1839. One of the earliest collections in which it is found is Ash and Evans's Bristol Collection, 1769, No. 281, with the omission of st. iv. ”That prize," &c. From that date it came into general use, sometimes in 4 stanzas, and again in 5 stanzas until it became widely known both in Great Britain and America. In modern collections it is held in greater favour by those of the Church of England than those of Nonconformists. Full original text in the New Congregational Hymn Book, No. 617, and the 4 stanza form unaltered, in Hymnal Companion, No. 452. In the latter collection the editor suggests that in Confirmation it be sung after the benedictory prayer, “Defend, O Lord, this Thy servant," &c. This 4 stanza arrangement has been rendered into Latin:—"Sursum, mens mea! Strenué," by the Rev. R. Bingham, and given in his Hymnologia Christina Latina, 1871, pp. 101-103. A slightly altered form of the hymn, as “Awake, our souls, awake from sloth" is given in a few hymnals, including Walker's Cheltenham Collection, 1855 and 1881.

All tunes published with 'Running the Christian Race'^ top

Great Songs of the Church (Revised) #543