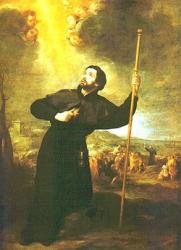 St. Francis Xavier, the great missionary saint of the Roman Catholic Church, was the son of Don John Giasso and Donna Maria d'Azpilqueta y Xavier; he was born at the castle Xavier, near Pampeluna, Spain, on April 7, 1506, and is known to history by his mother's name. At the age of eighteen he entered the University of Paris, where in due course he graduated, and then devoted himself to teaching. It was here that he became acquainted with Ignatius Loyola the founder of the Jesuits, who was then planning the colossal work which he afterwards accomplished. Xavier became one of the first nine of Loyola's converts, and the most enthusiastic of the little band. The date of the formation of the Order of the Jesuits is given as Aug. 15, 1534, and the place as Montmartre near Paris. We find Xavier at Venice with Loyola in 1537, where the visitation of a hospital for incurables was assigned to him. Here in the discharge of his duties he gave early evidence of his enthusiasm and self-devotion.

He subsequently visited Rome, where with Loyola and others of the Order he was brought, through the influence of the Rector of the University of Paris, who was then at Rome, to the notice of John III. of Portugal, who desired some of them for mission work in India. Circumstances led to the selection of Xavier for the work. He left Rome in March 1540, and set sail on April 7, 1541, for Goa, the chief city of the Portuguese possessions, where he arrived on May 6, 1542. From that time to the day of his death at Sancian, near Canton, on Dec. 22, 1552, he devoted himself to his work in a most heroic and devoted manner, visiting Travancore, Ceylon, Malacca, Japan, and other heathen lands with Cross in hand, and a burning zeal in his heart. Xavier's life has been written by many hands. The roll of deeds which he is said to have done, and the miracles he is said to have wrought, even to the raising of the dead, is long, but many of the alleged facts are open to the gravest doubt, and others are beyond belief. The hymns which are associated with Xavier's name are, "O Deus ego amo Te, Nam prior Tu amasti me," and "O Deus ego amo Te, Nee amo Te ut salves me.” That the first was written by him is most improbable, the evidence in his favour being absolutely nil. The second may possibly be his (see as above), it breathes his abnegation of self in every word, his spirit in every line. See Murray's Magazine for Oct. 1890, for an interesting account of Goa and its Cathedral, where Xavier lies buried.