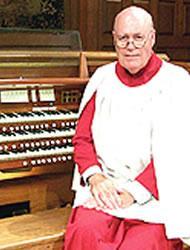 John Weaver retired at the end of May 2005, after 35 years of ministry as Director of Music and Organist at Madison Avenue Presbyterian Church in New York City. During his tenure here, he also served as Head of the Organ Department at the Curtis Institute of Music in Philadelphia from 1972 to 2003 and Chair of the Organ Department at the Juilliard School from 1987 to 2004. The American Organist named him among the 101 most notable organists of the 20th century.

Weaver traces his love for the "King of Instruments" back to his childhood. Born in the Eastern Pennsylvania town of Mauch Chunk (now called Jim Thorpe), his first introduction to music was through the organ at the First Presbyterian Church where his father was the pastor.

His formal musical studies began at the age of six in Baltimore's Peabody Conservatory when it was discovered that he had perfect pitch. Shortly thereafter he acquired an old harmonium that stimulated his desire to learn to play the organ. At the age of fourteen he began organ study with Richard Ross and George Markey, and the same year he also became organist of a Baltimore church and played his first organ recital. In 1989 John Weaver was honored by The Peabody Conservatory when he was presented with Peabody's Distinguished Alumni Award. He has received honorary Doctor of Music degrees from Westminster College, New Wilmington PA, and The Curtis Institute of Music. He was also elected a member of the North American Academy of Liturgy.

John Weaver's undergraduate study was at The Curtis Institute from which he graduated in 1959 as a student of Alexander McCurdy. That year he was appointed Director of Music at Holy Trinity Lutheran Church in New York City, a post he held for eleven years. During this time he spent two years in the Army as organist/choir-director of the Post Chapel at the United States Military Academy at West Point, and earned a Master of Sacred Music degree from Union Theological Seminary, studying with Robert Baker. In 1968 he founded a highly successful Bach Cantata Series at Holy Trinity, conducting his choir and orchestra in two seasons of these works. At these services he also played most of the major organ works of Bach and numerous chorale-preludes. At the Madison Avenue Presbyterian Church he annually conducts a large concert choir, The St. Andrew Chorale, in several major works with orchestra. In addition to his teaching at The Curtis Institute and The Juilliard School, he has served Westminster Choir College, Union Theological seminary and the Manhattan School of Music. He has written numerous articles for organ and church music magazines and has served as President of the Presbyterian Association of Musicians.

Dr. Weaver has been active as a concert organist since coming under management in 1959. He has played throughout the USA, Canada, Western Europe, the United Kingdom, and Brazil. Each year finds him in many different parts of the country playing recital programs drawn from his large repertoire of memorized works from every important era and national school of organ literature. His wife, Marianne, an excellent flutist whose teachers include Kincaid and Rampal, frequently adds an extra and very special stop to the organ by appearing on these programs.

John Weaver has performed on national television and radio network programs in the US and Germany. He has made recordings for Aeolian-Skinner, The Wicks Organ Company, the Klais Orgelbau of Germany, a CD on Gothic Records for the Schantz Organ Company, and a recent recording on the Pro Organo label on the new Reuter organ at University Presbyterian Church in Seattle. His published compositions for organ, chorus/organ and flute/organ are widely performed.

Weaver has made several concerto appearances with the Portland, Maine Symphony, the Musica Sacra Orchestra and the Harrisburg Symphony. He has played solo recitals at numerous regional and national conventions of the American Guild of Organists as well as the 1987 Internationalhttp://www.mapc.com Congress of Organists in Cambridge, England. He has been guest artist with the Chamber Music Society of Lincoln Center at Alice Tully Hall and Washington's Kennedy Center, and has played solo recitals at Boston Symphony Hall, Alice Tully Hall, Philadelphia's Academy of Music, Chicago's Orchestra Hall, Cleveland's Orchestra Hall, as well as colleges, cathedrals and churches throughout the US.