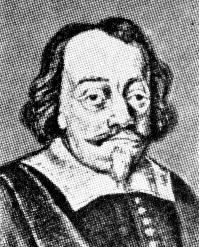 Thilo, Valentin, son of Valentin Thiel or Thilo [born Jan. 2, 1579, at Zinten, became diaconus of the Altstadt Church in 1603, and died of the pestilence at Königsberg in 1620], diaconus of the Altstadt Church in Königsberg, was born at Königsberg, April 19, 1607. He matriculated in 1624 at the University of Königsberg as a student of theology, but devoted himself more especially to the study of rhetoric. When the Professor of Rhetoric, Samuel Fuchs, retired in 1632, he recommended Thilo as his successor. The post was, at Thilo's desire, kept open for two years, during which he pursued his studies at the University of Leyden. On returning to Königsberg, he graduated M.A. there on April 20, 1634, and was thereafter installed as Professor of Rhetoric. During his 28 years’ tenure of office he was five times elected as dean of the Philosophical Faculty, and twice as Rector of the University. He died at Königsberg, July 27,1662. (Koch, iii 202; K. Goedeke's Grundriss, vol. iii., 1887, p. 135, &c.)

Thilo was a great friend of Heinrich Albert and of Simon Dach, and was with them a member of the Königsberg Poetical Union. He was the author of two text books on Rhetoric, published in 1635 and 1647. Some of his separately printed occasional poems are noted by Goedeke as above. His hymns were almost all written for various Festivals of the Christian Year. They are as a rule short and vigorous, and are somewhat akin to those of Dach. They appeared principally in the Preussische Fest-Lieder, Elbing, 1642-44 [Berlin Library], and in the New Preussisches vollständiges Gesang-Buch, Königsberg, 1650 [Hamburg Library]. A list of their first lines is printed in the Altpreussische Monats-schrift, Königsberg, 1889, p. 308, where evidence is given to show that they are by the younger Thilo, and not, as has sometimes been said, by the father.

The only hymn by Thilo translated into English is:—
Mit Ernst, o Menschenkinder. Advent. This is a fine hymn founded on St. Luke iii. 4, 5, and was first published in pt. i., Elbing, 1642, of the Preussische Fest-Lieder, as No. 8, in 4 stanzas of 8 lines, entitled "On the Fourth Sunday of Advent. Parate viam Domino," and marked as by "Valentinus Thilo." Lauxmann, in Koch, viii. 8, considers st. iii. the finest, and thinks that it may have been suggested by the remembrance of his beloved sister (wife of Pastor Kuhn, of the Rossgart Church in Königsberg), who died of the pestilence on Aug. 16, 1639, and as a picture of her character. Translated as:—
1. 0 sons of men, your spirit. This is a good translation of st. i.-iii., by A. T. Russell, as No. 35 in his Psalms & Hymns 1851.
2. Ye sons of men, in earnest. This is a good translation of the original form, by Miss Winkworth, as No. 84 in her Chorale Book for England, 1863. It is repeated, omitting st. iii., in the Ohio Lutheran Hymnal 1880, No. 121. [Rev. James Mearns, M.A.]