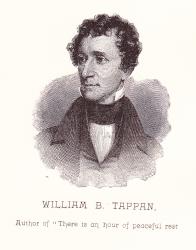 Of these works the earliest are the most-important. His hymns in common use include the following:—
1. Holy be this as was the place. Public Worship. Included in his Lyrics, 1822; and given in Lyra Sacra Americana, 1868.
2. The ransomed spirit to her home. Love. Appeared in Nettleton's Village Hymns, 1824. This is probably his best hymn.
3. There is an hour of hallowed peace. Heaven, a Place of Rest. Given in his New England and Other Poems, 1819.
4. There is an hour of peaceful rest. Heaven a Place of Rest. The author's account of this hymn in his Gems of Sacred Poetry, 1860, is that it "was written by me, in Philadelphia, in the summer of 1818, for the Franklin Gazette, edited by Richard Bache, Esq., and was introduced by him to the public in terms sufficiently flattering to a young man who then certainly lacked confidence in himself. The piece was republished in England and on the Continent, in various newspapers and magazines, and was also extensively circulated in my own native land, where it has found a place in several hymn and music-books. It was published in my first volume of Poems, at Philadelphia, in 1819, and soon after was set to music by A. P. Heinrich, Esq., in the same city." It is in Lyra Sacra Americana, 1868, p. 265.
5. 'Tis midnight, and on Olive's brow. Gethsemane. Appeared in his Poems, 1822, and repeated in Lyra Sacra Americana, 1868, and several hymnals.
6. Wake, isles of the south, your redemption is near. Missions. Appeared in the Lyrics, 1822. It was sung at the wharf in New Haven at the embarkation of Missionaries for the Sandwich Islands, 1822.
7. When sorrow casts its shades around us. Resignation. From his New England and Other Poems, 1819. It is in Lyra Sacra Americana, 1868.
8. While the solemn note of time. Saturday Evening. Published in his Poems, 1822; repeated in Lyra Sacra Americana, 1868, and thence into Thring's Collection, 1882. [Rev F. M. Bird, M.A.]