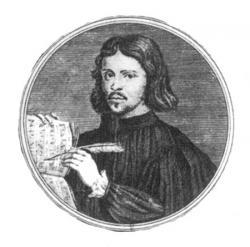 Thomas Tallis (b. Leicestershire [?], England, c. 1505; d. Greenwich, Kent, England 1585) was one of the few Tudor musicians who served during the reigns of Henry VIII: Edward VI, Mary, and Elizabeth I and managed to remain in the good favor of both Catholic and Protestant monarchs. He was court organist and composer from 1543 until his death, composing music for Roman Catholic masses and Anglican liturgies (depending on the monarch). With William Byrd, Tallis also enjoyed a long-term monopoly on music printing. Prior to his court connections Tallis had served at Waltham Abbey and Canterbury Cathedral. He composed mostly church music, including Latin motets, English anthems, settings of the liturgy, magnificats, and two sets of lamentations. His most extensive contrapuntal work was the choral composition, "Spem in alium," a work in forty parts for eight five-voice choirs. He also provided nine modal psalm tunes for Matthew Parker's Psalter (c. 1561).