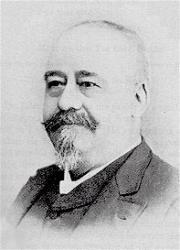 John R. Sweney (1837-1899) was born in West Chester, Pennsylvania, and exhibited musical abilities at an early age. At nineteen he was studying with a German music teacher, leading a choir and glee club, and performing at children’s entertainments. By twenty-two he was teaching at a school in Dover, Delaware. Soon thereafter, he was put in charge of the band of the Third Delaware Regiment of the Union Army for the duration of the Civil War. After the war, he became Professor of Music at the Pennsylvania Military Academy, and director of Sweney’s Cornet Band. He eventually earned Bachelor and Doctor of Music degrees at the Academy.

Sweney began composing church music in 1871 and became well-known as a leader of large congregations. His appreciators stated “Sweney knows how to make a congregation sing” and “He had great power in arousing multitudes.” He also became director of music for a large Sunday school at the Bethany Presbyterian Church in Philadelphia of which John Wanamaker was superintendent (Wanamaker was the founder of the first major department store in Philadelphia). In addition to his prolific output of hymn melodies and other compositions, Sweney edited or co-edited about sixty song collections, many in collaboration with William J. Kirkpatrick. Sweney died on April 10, 1899, and his memorial was widely attended and included a eulogy by Wanamaker.