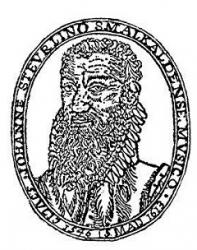 Johann Steurlein (b. Schmalkalden, Thuringia, Germany, 1546; d. Meiningen, Germany, 1613) studied law at the University of Wittenberg. From 1569 to 1589 he lived in Wasungen near Meiningen, where he served as town clerk as well as cantor and organist in the Lutheran church. From 1589 until his death he lived in Meiningen, where at various times he served as notary public, mayor, and secretary to the Elector of Saxony. A gifted poet and musician, Steurlein rhymed both the Old and New Testaments in German. A number of his hymn tunes and harmonizations were published in Geistliche Lieder (1575) and Sieben und Zwantzig Neue Geistliche Gesenge (1588).