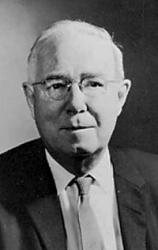 Leo Sowerby (1895-1968) was born in Grand Rapids and studied at the American Conservatory of Music, Chicago (M.A. 1918). He served as regimental bandmaster with the 332nd Field Artillery Band in both England and France (1917-1919). He became the first fellow of the American Academy in Rome, where he studied for three years. He participated in the Salzburg Festival for Contemporary Music in 1923. From 1924 to 1963 he was on the faculty of the American Conservatory. He also was organist and choirmaster of St. James Church (1927-1963). Sowerby had an interest in folk music which he turned into wonderful compositions. He won a Pulitzer Prize for his Canticle of the Sun (1946). He died at Port Clinton, Ohio.