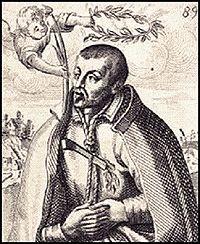 Robert Southwell (c. 1561 – 21 February 1595), also Saint Robert Southwell, was an English Roman Catholic priest of the Jesuit Order. He was also a poet, hymnodist, and clandestine missionary in Elizabethan England. After being arrested and imprisoned in 1592, and intermittently tortured and questioned by Richard Topcliffe, Southwell was eventually tried and convicted of high treason for his links to the Holy See. On 21 February 1595, Father Southwell was hanged at Tyburn. In 1970, he was canonised by Pope Paul VI as one of the Forty Martyrs of England and Wales.
Wikipedia Biography
TextsTunesHymnals