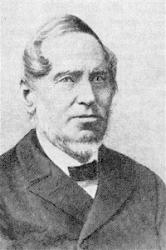 Samuel Francis Smith (October 21, 1808 – November 16, 1895) was an American Baptist minister, journalist, and author. He is best known for having written the lyrics to "My Country, 'Tis of Thee" (sung to the tune of "God Save The Queen"), which he entitled "America".
Wikipedia Biography
TextsTunesHymnals