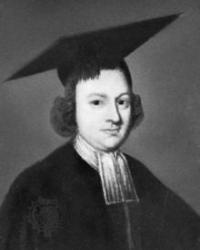 Smart, Christophe, M.A., was born at Shipburn, Kent, in 1722, and educated at Pembroke Hall, Cambridge, where he gained the Seatonian prize for five years, four of which were in succession, (B.A. 1747.) He removed to London in 1753, and gave some attention to literature: but neglecting both his property and his constitution, he became poor and insane. He died in the King's Bench, 1771. His Poems were published in 2 vols. in 1771. From that work "Father of light conduct my feet" (Divine Guidance), and "I sing of God the mighty Source" [God the Author of All), have been taken.

Christopher Smart (11 April 1722 – 21 May 1771) was an English poet. He was a major contributor to two popular magazines, The Midwife and The Student, and a friend to influential cultural icons like Samuel Johnson and Henry Fielding. Smart, a high church Anglican, was widely known throughout London.
Wikipedia Biography
TextsTunesHymnals