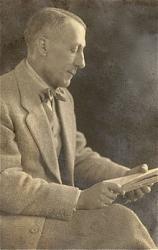 Martin F. Shaw was educated at the Royal College of Music in London and was organist and choirmaster at St. Mary's, Primrose Hill (1908-1920), St. Martin's in the Fields (1920-1924), and the Eccleston Guild House (1924-1935). From 1935 to 1945 he served as music director for the diocese of Chelmsford. He established the Purcell Operatic Society and was a founder of the Plainsong and Medieval Society and what later became the Royal Society of Church Music.

Author of The Principles of English Church Music Composition (1921), Shaw was a notable reformer of English church music. He worked with Percy Dearmer (his rector at St. Mary's in Primrose Hill); Ralph Vaughan Williams, and his brother Geoffrey Shaw in publishing hymnals such as Songs of Praise (1925, 1931) and the Oxford Book of Carols (1928). A leader in the revival of English opera and folk music scholarship, Shaw composed some one hundred songs as well as anthems and service music; some of his best hymn tunes were published in his Additional Tunes in Use at St. Mary's (1915).