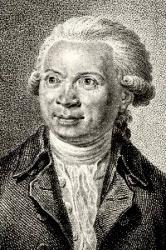 Johann Abraham Peter Schulz Germany 1747-1800. Born at Luneburg, Germany, son of a baker, he attended St Michaelis school in Luneburg and studied organ, then the Johanneum from 1759-1764. In 1765 he was a student of composer, Johann Kimberger, and then taught in Berlin himself. In 1768 Kimberger recommended Schulz for the position of music teacher and accompanist to the Polish Princess Sapieha Woiwodin von Smolensk. Schulz moved to Berlin and traveled with her for three years performing throughout Europe, where he came in contact with many new musical ideas. He married Catharina Maria Gercken, and they had a daughter, Celle. He served as the conductor of the French Theatre in Berlin from 1776-1780. From 1786-1787 he was the Kapellmeister of Prince Henry in Rheinsberg. He began writing operas in 1785 and became musical director of the Berlin French theatre. Schulz went on to serve as Court Kapellmeister in Copenhagen from 1787-1795 before returning to Berlin. In Copenhagen the music library burned down, and he had a breakdown in health from trying to save it. His health suffered further from the effects of a shipwreck he experienced in 1796. Schulz wrote seven operas, stage music, oratorios, and cantatas, as well as piano pieces, folk songs, and church music. He also wrote articles on music theory for Johann Georg Sulzer’s ‘Allgemeine Theorie der schonen Kunste’ in four volumes. He died at Schwedt an der Oder, Germany.