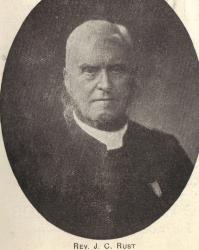 J. (John) Cyprian Rust was an Anglican priest, son of Baptist-turned-Anglican clergyman Cyprian Thomas Rust. He was born about 1841, and died June 29, 1927. In 1879 won the Seatonian Prize for his poem Antioch (which indicates that he must have been M. A. Cantab.). He was for some 53 years the vicar of the Church in Soham, Cambridgeshire. His sermon at the second World Esperanto Congress (Geneva, 1906) was the first known Christian preaching in the Esperanto language. In 1907 he "translated" (and in part, at least, edited, authored, and composed) the first Esperanto-language hymn publication, Ordo de Diservo; his DOKSOLOGIO in that service booklet was the first published Christian hymn tune composed for an original Esperanto text, his own "Estu nun laŭdata Dio", and his translation work appears to have been limited to the liturgy; all the translated hymns in it are by other translators, and his own two hymns he wrote originally in Esperanto. He was the chairman of the Anglican committee which in 1912 produced the standard Esperanto "Londona" version of the New Testament.