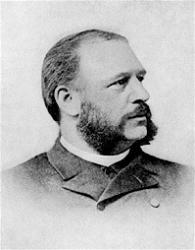 Daniel C. Roberts (b. Bridgehampton, Long Island, NY, 1841; d. Concord, NH, 1907) Educated at Kenyon College, Gambier, Ohio, served in the union army during the Civil War. He was ordained in the Episcopal Church as a priest in 1866 and ministered to several congregations in Vermont and Massachusetts. In 1878 he began a ministry at St. Paul Church in Concord, New Hampshire, that lasted for twenty-three years. Serving for many years president of the New Hampshire State Historical Society, Roberts once wrote, "I remain a country parson, known only within my small world," but his hymn "God of Our Fathers" brought him widespread recognition.