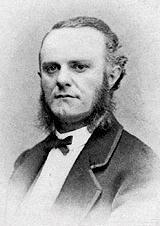 Lewis Henry Redner (1831-1908) was born in Philadelphia, where he became a real estate agent and served on weekends as an organist and Sunday School Superintendent. He spent nineteen years at Holy Trinity church where Phillip Brooks was rector, and is credited with increasing attendance at the Sunday School from thirty-one to more than a thousand. In 1868 Brooks asked him to write a tune for his new text for children inspired by his recent trip to Bethlehem. Redner composed the tune the night before it was to be sung in worship on Sunday morning. The text and tune were first published in 1894 in The Church Porch, where the tune was named ST. LOUIS, possibly after the composer’s name. Redner is remembered today because of this one tune that has remained a Christmas favorite.