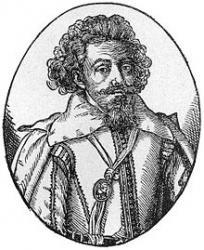 Born into a staunchly Lutheran family, Michael Praetorius (b. Creuzburg, Germany, February 15, 1571; d. Wolfenbüttel, Germany, February 15, 1621) was educated at the University of Frankfort-an-der-Oder. In 1595 he began a long association with Duke Heinrich Julius of Brunswick, when he was appoint­ed court organist and later music director and secretary. The duke resided in Wolfenbüttel, and Praetorius spent much of his time at the court there, eventually establishing his own residence in Wolfenbüttel as well. When the duke died, Praetorius officially retained his position, but he spent long periods of time engaged in various musical appointments in Dresden, Magdeburg, and Halle. Praetorius produced a prodigious amount of music and music theory. His church music consists of over one thousand titles, including the sixteen-volume Musae Sionae (1605-1612), which contains Lutheran hymns in settings ranging from two voices to multiple choirs. His Syntagma Musicum (1614-1619) is a veritable encyclopedia of music and includes valuable information about the musical instruments of his time.