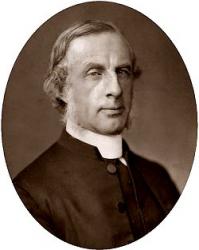 Edward H. Plumptre (b. London, England, August 6, 1821; d. Wells, England, February 1, 1891) was an eminent classical and biblical scholar who gained prominence in both church and university. Educated at King's College, London, and University College, Oxford, he was ordained in the Church of England in 1846. Plumptre served as a preacher at Oxford and a professor of pastoral theology at King's College, and held a number of other prestigious positions. His writings include A Life of Bishop Ken (1888), translations from Greek and Latin classics, and poetry and hymns. Plumptre was also a member of the committee that produced the Revised Version of the Bible.

====================
Plumptre, Edward Hayes, D.D., son of Mr. E. H. Plumptre, was born in London, Aug. 6, 1821, and educated at King's College, London, and University College, Oxford, graduating as a double first in 1844. He was for some time Fellow of Brasenose. On taking Holy Orders in 1846 he rapidly attained to a foremost position as a Theologian and Preacher. His appointments have been important and influential, and include that of Assistant Preacher at Lincoln's Inn; Select Preacher at Oxford; Professor of Pastoral Theology at King's College, London; Dean of Queen's, Oxford; Prebendary in St. Paul's Cathedral, London; Professor of Exegesis of the New Testament in King's College, London; Boyle Lecturer; Grinfield Lecturer on the Septuagint, Oxford; Examiner in the Theological schools at Oxford; Member of the Old Testament Company for the Revision of the A.V. of the Holy Scriptures; Rector of Pluckley, 1869; Vicar of Bickley, Kent, 1873; and Dean of Wells, 1881.

Dean Plumptre's literary productions have been very numerous and important, and embrace the classics, history, divinity, biblical criticism, biography, and poetry. The list as set forth in Crockford's Clerical Directory is very extensive. His poetical works include Lazarus, and Other Poems, 1864; Master and Scholar, 1866; Things New and Old, 1884; and translations of Sophocles, Æschylus, and Dante. As a writer of sacred poetry he ranks very high. His hymns are elegant in style, fervent in spirit, and broad in treatment. The subjects chosen are mainly those associated with the revived Church life of the present day, from the Processional at a Choral Festival to hospital work and the spiritual life in schools and colleges. The rhythm of his verse has a special attraction for musicians, its poetry for the cultured, and its stately simplicity for the devout and earnest-minded. The two which have attained to the most extensive use in Great Britain and America are: Rejoice, ye pure in heart," and "Thine arm, O Lord, in days of old." His translations from the Latin, many of which were made for the Hymnary, 1871 and 1872, are very good and musical, but they have not been used in any way in proportion to their merits.

Dean Plumptre's Life of Bishop Ken, 1888, is an exhaustive and excellent work.