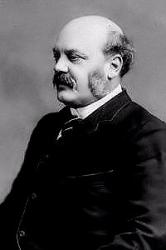 Albert Lister Peace DMus United Kingdom 1844-1912. Born at Huddersfield, Yorkshire, England, son of a warehouseman and woolstapler, he was extremely gifted as a musician, largely self-taught, playing the organ at Holmfirth Parish Church near Huddersfield at age nine. He married Margaret Martin Steel Gilchrist, and they had three children: Lister, Archibald, and Margaret. In 1865 he was appointed organist of Trinity Congregational Church in Glasgow, Scotland. He obtained his doctorate degree from the University of Oxford in 1875. He became organist at Glasgow Cathedral in 1879. In 1897 he succeeded William Best as organist at St George’s Hall, Liverpool. In later years he was in much demand to play the organ in recitals. He did so at Canterbury Cathedral (1886), Victoria Hall, Hanley, Stoke-on-Trent (1888), and Newcastle Cathedral (1891). He composed orchestrations, sonatas, cantatas, and concert and church service anthems. He was an arranger, author, and editor. He died at Blundelsands, Liverpool, England.