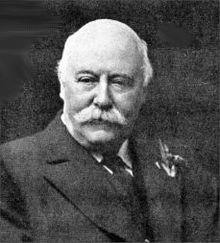 Charles Hubert Hastings Parry KnBch/Brnt BMus United Kingdom 1848-1918. Born at Richmond Hill, Bournemouth, England, son of a wealthy director of the East India Company (also a painter, piano and horn musician, and art collector). His mother died of consumption shortly after his birth. His father remarried when he was three, and his stepmother favored her own children over her stepchildren, so he and two siblings were sometimes left out. He attended a preparatory school in Malvern, then at Twyford in Hampshire. He studied music from 1856-58 and became a pianist and composer. His musical interest was encouraged by the headmaster and by two organists. He gained an enduring love for Bach’s music from S S Wesley and took piano and harmony lessons from Edward Brind, who also took him to the ‘Three Choirs Festival in Hereford in 1861, where Mendelssohn, Mozart, Handel, and Beethoven works were performed. That left a great impression on Hubert. It also sparked the beginning of a lifelong association with the festival. That year, his brother was disgraced at Oxford for drug and alcohol use, and his sister, Lucy, died of consumption as well. Both events saddened Hubert. However, he began study at Eton College and distinguished himself at both sport and music. He also began having heart trouble, that would plague him the rest of his life. Eton was not known for its music program, and although some others had interest in music, there were no teachers there that could help Hubert much. He turned to George Elvey, organist of St George’s Chapel, Windsor Castle, and started studying with him in 1863. Hubert eventually wrote some anthems for the choir of St George’s Chapel, and eventually earned his music degree. While still at Eton, Hubert sat for the Oxford Bachelor of Music exam, the youngest person ever to have done so. His exam exercise, a cantata: “O Lord, Thou hast cast us out” astonished the Heather Professor of Music, Sir Frederick Ouseley, and was triumphantly performed and published in 1867. In 1867 he left Eton and went to Exeter College, Oxford. He did not study music there, his music concerns taking second place, but read law and modern history. However, he did go to Stuttgart, Germany, at the urging of Henry Hugh Pierson, to learn re-orchestration, leaving him much more critical of Mendelssohn’s works. When he left Exeter College, at his father’s behest, he felt obliged to try insurance work, as his father considered music only a pastime (too uncertain as a profession). He became an underwriter at Lloyd’s of London, 1870-77, but he found the work unappealing to his interests and inclinations. In 1872 he married Elizabeth Maude Herbert, and they had two daughters: Dorothea and Gwendolen. His in-laws agreed with his father that a conventional career was best, but it did not suit him. He began studying advanced piano with W S Bennett, but found it insufficient. He then took lessons with Edward Dannreuther, a wise and sympathetic teacher, who taught him of Wagner’s music. At the same time as Hubert’s compositions were coming to public notice (1875), he became a scholar of George Grove and soon an assistant editor for his new “Dictionary of Music and Musicians”. He contributed 123 articles to it. His own first work appeared in 1880. In 1883 he became professor of composition and musical history at the Royal College of Music (of which Grove was the head). In 1895 Parry succeeded Grove as head of the college, remaining in the post the remainder of his life. He also succeeded John Stainer as Heather Professor of Music at the University of Oxford (1900-1908). His academic duties were considerable and likely prevented him from composing as much as he might have. However, he was rated a very fine composer, nontheless, of orchestrations, overtures, symphonies, and other music. He only attempted one opera, deemed unsuccessful. Edward Elgar learned much of his craft from Parry’s articles in Grove’s Dictionary, and from those who studied under Parry at the Royal College, including Ralph Vaughn Williams, Gustav Holst, Frank Bridge, and John Ireland. Parry had the ability when teaching music to ascertain a student’s potential for creativity and direct it positively. In 1902 he was created a Baronet of Highnam Court in Gloucester. Parry was also an avid sailor and owned several yachts, becoming a member of the Royal Yacht Squadron in 1908, the only composer so honored. He was a Darwinian and a humanist. His daughter reiterated his liberal, non-conventional thinking. On medical advice he resigned his Oxford appointment in 1908 and produced some of his best known works. He and his wife were taken up with the ‘Suffrage Movement’ in 1916. He hated to see the WW1 ravage young potential musical talent from England and Germany. In 1918 he contracted Spanish flu during the global pandemic and died at Knightsscroft, Rustington, West Sussex. In 2015 they found 70 unpublished works of Parry’s hidden away in a family archive. It is thought some may never have been performed in public. The documents were sold at auction for a large sum. Other works he wrote include: “Studies of great composers” (1886), “The art of music” (1893), “The evolution of the art of music” (1896), “The music of the 17th century” (1902). His best known work is probably his 1909 study of “Johann Sebastian Bach”.