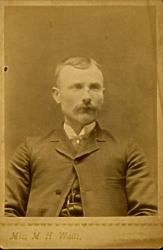 Rv John Samuel Norris United Kingdom/USA 1844-1907. Born at West Cowes, Isle of Wight, UK, he emigrated to the US when young and attended school in Canada. He was ordained a Methodist minister in Oshawa, ON, in 1868. Over the next decade he pastored at churches in Canada, NY, and WI. He switched to the Congregationalist denomination in 1878, serving churches in Mondovi, Shullsburg, and Hixton, WI, and Grand Rapids, MI. From 1882 -1901 he held pastorates at Ames, Webster City, Parkersburg, Peterson, and Tripoli, IA.. He died in Chicago, IL.