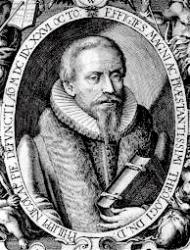 Philipp Nicolai (b. Mengeringhausen, Waldeck, Germany, 1556; d. Hamburg, Germany, 1608) lived an eventful life–he fled from the Spanish army, sparred with Roman Catholic and Calvinist opponents, and ministered to plague-stricken congregations. Educated at Wittenberg University, he was ordained a Lutheran pastor in 1583 in the city of Herdecke. However, he was soon at odds with the Roman Catholic town council, and when Spanish troops arrived to reestablish Roman dominance, Nicolai fled. In 1588 he became chief pastor at Altwildungen and court preacher to Countess Argaretha of Waldeck. During that time Nicolai battled with Calvinists, who disagreed with him about the theology of the real presence of Christ in the Lord's Supper. These doctrinal controversies were renewed when he served the church in Unna, Westphalia. During his time as a pastor there, the plague struck twice, and Nicolai wrote both "How Bright Appears the Morning Star" and "Wake, Awake." Nicolai's last years were spent as Pastor of St. Katherine's Church in Hamburg.

Bert Polman
=====================
Nicolai, Philipp, D.D., son of Dieterich Nicolai, sometime Lutheran pastor at Herdecke, in Westphalia, and after 1552, at Mengeringhausen in Waldeck, was born at Mengeringhausen, August 10, 1556. (The father was son of Nicolaus Rafflenbol, of Rafflenbol, near Hagen, in Westphalia, and in later life had adopted the Latinised form Nicolai of his father's Christian name as his own surname.) In 1575 Nicolai entered the University of Erfurt, and in 1576 he went to Wittenberg. After completing his University course in 1579 (D.D. at Wittenberg July 4, 1594), he lived for some time at Volkliardinghausen, near Mengeringhausen, and frequently preached for his father. In August, 1583, he was appointed Lutheran preacher at Herdecke, but found many difficulties there, the members of the Town Council being Roman Catholics. After the invasion by the Spanish troops in April, 1586, his colleague re-introduced the Mass, and Nicolai resigned his post. In the end of 15S6 he was appointed diaconus at Niederwildungen, near Waldeck, and in 1587 he became pastor there. He then became, in Nov. 1588, chief pastor at Altwildungen, and also court preacher to the widowed Countess Margafetha of Waldeck, and tutor to her son, Count Wilhelm Ernst. Here he took an active part on the Lutheran side in the Sacramentarian controversy, and was, in Sept. 1592, inhibited from preaching by Count Franz of Waldeck, but the prohibition was soon removed, and in the Synod of 1593 held at Mengeringhausen, he found all the clergy of the principality of Waldeck willing to agree to the Formula of Concord.

In October, 1596, he became pastor at Unna, in Westphalia, where he again became engaged in heated controversy with the Calvinists; passed through a frightful pestilence (see below); and then on Dec. 27, 1598, had to flee before the invasion of the Spaniards, and did not return till the end of April, 1599. Finally, in April 1601, he was elected chief pastor of St. Katherine's Church, at Hamburg, where he entered on his duties Aug. 6, 1601. On Oct. 22, 1608, he took part in the ordination of a colleague in the St. Katherine's Church, the diaconus Penshora, and returned home feeling unwell. A violent fever developed itself, under which he sank, and died Oct. 26, 1608 (D. Philipp Nicolai’s Leben und Lieder, by L. Curtze, 1859; Koch, ii. 324; Allgemeine Deutsche Biographie xxiii. 607, &c).

In Hamburg Nicolai was universally esteemed, was a most popular and influential preacher, and was regarded as a "pillar" of the Lutheran church. In his private life he seems to have been most lovable and estimable. Besides his fame as a preacher, his reputation rests mainly on his hymns. His printed works are mostly polemical, often very violent and acrid in tone, and such as the undoubted sincerity of his zeal to preserve pure and unadulterated Lutheranism may explain, but cannot be said to justify. Of his hymns only four seem to have been printed.

Three of Nicolai's hymns were first published in his devotional work entitled Frewden-Spiegel dess ewigen Lebens, published at Frankfurt-am-Main, 1599 (see further below). The two noted here ("Wachet auf” and “Wie schon") rank as classical and epoch-making. The former is the last of the long series of Watchmen's Songs. The latter marks the transition from the objective churchly period to the more subjective and experimental period of German hymn writing; and begins the long series of Hymns of Love to Christ as the Bridegroom of the Soul, to which Franck and Scheffler contributed such beautiful examples. Both are also worthy of note for their unusual and perfect rhythms, and for their splendid melodies.
They are:—

It is a reversed acrostic, W. Z. G. for the Graf zu Waldeck, viz. his former pupil Count Wilhelm Ernst, who died at Tübingen Sept. 16, 1598, in his fifteenth year. It seems to have been written in 1597 at Unna, in Wesphalia, where Nicolai was then pastor; and during the terrible pestilence which raged there from July, 1597, to January, 1598, to which in July 300, in one week in August 170, and in all over 1300 fell victims. Nicolai's parsonage overlooked the churchyard, and there daily interments took place, often to the number of thirty. In these days of distress, when every household was in mourning, Nicolai's thoughts turned to Death, and thence to God in Heaven, and to the Eternal Fatherland. Jn the preface (dated Aug. 10, 1598) to his Frewden-Spiegel he says: "There seemed to me nothing more sweet, delightful and agreeable, than the contemplation of the noble, sublime doctrine of Eternal Life obtained through the Blood of Christ. This I allowed to dwell in my heart day and night, and searched the Scriptures as to what they revealed on this matter, read also the sweet treatise of the ancient doctor Saint Augustine [De Civitate Dei].
..... Then day by day I wrote out my meditations, found myself, thank God! wonderfully well, comforted in heart, joyful in spirit, and truly content; gave to my manuscript the name and title of a Mirror of Joy, and took this so composed Frewden-Spiegel to leave behind me (if God should call me from this world) as the token of my peaceful, joyful, Christian departure, or (if God should spare me in health) to comfort other sufferers whom He should also visit with the pestilence .... Now has the gracious, holy God most mercifully preserved me amid the dying from the dreadful pestilence, and wonderfully spared me beyond all my thoughts and hopes, so that with the Prophet David I can say to Him "0 how great is Thy goodness, which Thou hast laid up for them that fear Thee," &c.

The hymn composed under these circumstances (it may be stated that Curtze thinks both hymns were written in 1596, while Nicolai was still at Alt-Wildungen) soon became popular, and still retains its place, though often altered in the 3rd stanza. Probably the opening lines;

are borrowed from one of the Wächter-Lieder, a form of lyric popular in the Middle Ages, introduced by Wolfram von Eschenbach. (See K. Goedeke's Deutsche Dichtung im Mittelalter, 1871, p. 918.) But while in the Songs the voice of the Watchman from his turret summons the workers of darkness to flee from discovery, with "Nicolai it is a summons to the children of light to awaken to their promised reward and full felicity.

The melody appeared first along with the hymn, and is also apparently by Nicolai, though portions of it (e.g. 1. 1 by the Gregorian Fifth Tone) may have been suggested by earlier tunes. It has been called the King of Chorales, and by its majestic simplicity and dignity it well deserves the title. Since its use by Mendelssohn in his St. Paul it has become well known in England, and, in its original form, is given in Miss Winkworth's Chorale Book for England, 1863 (see below).

"One morning in great distress and tribulation in his quiet study. He rose in spirit from the distress and death which surrounded him to his Redeemer and Saviour, and while he clasped Him in ardent love there welled forth from the inmost depths of his heart this precious hymn of the Saviour's love and of the joys of Heaven. He was so entirely absorbed in this holy exaltation that he forgot all around him, even his midday meal, and allowed nothing to disturb him in his poetical labours till the hymn was completed "—-three hours after midday.

As Nicolai was closely connected with Waldeck he formed with the initial letters of his stanzas the acrostic W. E. G. U. H. Z. W., viz. Wilhelm Ernst Graf Und Herr Zn Waldeck— his former pupil.
The hymn has reminiscences of Eph. v., of Canticles, and of the Mediaeval Hymns to the Blessed Virgin Mary. It became at once a favourite in Germany, was reckoned indispensable at weddings, was often sung around death beds, &c. The original form is in Wackernagel v. p. 258, and the Unverfälschter Liedersegen, 1851, No. 437; but this (as will be seen by comparing Miss Winkworth's version of 1869) is hardly suited for present day congregational use. In Bunsen's Versuch, 1833, No. 554, it is slightly altered. The form in Knapp's Evangelischer Lieder-Schatz, 1837, No. 2074 (1865, No. 1810) is a recast by Knapp made on Jan. 14, 1832, and published in his Christoterpe, 1833, p. 285, preceded by a recast of "Wachet auf!"; both being marked as “rewritten according to the requirements of our times."

The popularity of the hymn was greatly aided by its beautiful chorale (named by Mr. Mercer, Frankfort), which has been called "The Queen of Chorales," and to which many city chimes in Germany were soon set. It was published with the hymn, and is probably an original tune by Nicolai, though portions may have been suggested by earlier melodies, especially by the "Resonet in laudibus," which is probably of the 14th cent. (Bäumker i., No. 48, cites it from the Obsequiale, Ingolstadt, 1570. In Alton's Congregational Psalmist named Arimathea).

There are also three hymns in common use, which have generally been regarded as translations from Nicolai. They are noted as follows:—i. "Behold how glorious is yon sky" (see p. 127, ii.). ii. "How beautiful the Morning Star". iii. "How brightly shines the Morning Star! What eye descries it from afar". [Rev. James Mearns, M.A.]