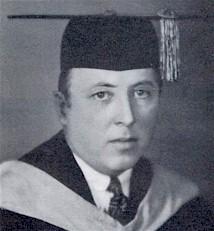 Marlatt, Earl Bowman. (Columbus, Indiana, May 24, 1892--June 13, 1976, Winchester, Ind.). One of twin boys, he was born into the family of a Methodist Episcopal minister at Columbus, Ind. Graduating from DePauw University, Phi Beta Kappa, in 1912, he continued his studies at Harvard and Boston Universities, Oxford, England, and the University of Berlin. Upon returning to America he spent one year in newspaper work at Kenosha, Wisconsin, and then joined the United States Army, serving as a second lieutenant of field artillery in World War I.

He joined the staff at Boston University as Associate Professor of Philosophy in 1923, becoming Professor two years later, was Professor of Literature, Boston University School of Theology, and Dean, 1938-1945. In 1946 he became Professor of Philosophy of Religion at Perkins School of Theology, Southern Methodist University, Dallas, Texas. Member of many learned societies, a poet of distinction, he won the Golden Flower at the May Day Poetry Tournament in Boston, 1925, and has been President of both the Boston Browning Society and the Boston Authors' Club. A writer of prose as well as verse he has contributed widely to American journals. Marlatt was closely associated with and was literary advisor to H. Augustine Smith who compiled a series of hymnals during the 1920s, most of which were for young people. He was associate editor of The American Student Hymnal, 1928, one of the Smith books, and for many years a member of the Executive Committee of the Hymn Society.

Sources: Who's Who in America; handbooks of various hymnals; personal acquaintance and correspondence.