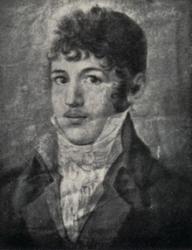 Rv Henri Abraham Cesar Malan, 1787-1864. Born in Geneva, Switzerland, into a bourgeois family that moved to Switzerland to escape religious persecution during the French Revolution, he attended the university in Marseilles, France, intending to become a businessman. Although having some grounding in religious faith by his mother, he decided to attend the Academy at Geneva (founded by Calvin) in preparation for ministry. He was ordained in 1810, after being appointed a college master (teaching Latin) in 1809. Malan was in accord with the National Church of Geneva as a Unitarian, but the Reveil Movement caused him to become a dissident (evangelical) instead of a proponent of the Reformed Church (believing works, not faith, was what mattered). In 1811 he married (wife’s name not found). They had at least two children (one son was Solomon, referenced below). From 1813 on Malan slowly became an evangelical, after being given an understanding of true salvation through grace (not works) in 1816 by two German Lutherans from Geneva. He became saved upon this realization and was so changed that he burned his prized collection of classical authors and manuscripts. In 1817 he preached around Geneva, and one sermon in particular, “Man only justified by faith alone” created a firestorm and brought him into conflict with religious authorities of the region. From then on he wished to help reform the national church from within, but the forces of the Venerable Company were too strong for him and excluded him from the pulpits and caused his dismissal from his regentsship at the college in 1818. Others in agreement with Malan were Charles Spurgeon, Robert Wilcox, Robert Haldane, and Henry Drummond. In 1820 he built a chapel in his garden and obtained the license of the State for it as a separatist place of worship. He preached in that chapel 43 years. In 1823 he was formally deprived of his status as a minister of the national Church. Various events caused his congregation to diminish over the next few years, and he began long tours of evangelization subsidized by religious friends in his land, Belgium, France, England and Scotland. He often preached to large congregations. Malan also authorized a hymn book, “Chants de Sion” (1841). A strong Calvinist, Malan lost no opportunity to evangelize. On one occasion an old man he visited pulled Malan’s hymnal out and told him he had prayed to see the author of it before he died. On a visit to England Malan also inspired author, Charlotte Elliott, to write the hymn lyrics for “Just as I am”, when seeking an answer to her conversion she asked and he advised her to come to Christ ‘just as she was’. Malan published a score of books and also produced many religious tracts and pamphlets largely on questions in dispute between the National and evangelical churches of Rome. He also wrote articles in the “Record” and in American reviews. His hymns were set to his own melodies. He was an artist, a mechanic, a carpenter, a metal forger, and a printer. He had his own workshop, forge and printing press. One of his greatest joys was the meeting of the evangelical alliance at Geneva in 1861 which helped change church views. He retired to his home, Vandoeuvres, in the countryside near Geneva in 1857, dying there seven years later.. He was honored by a visit from the Queen of Holland two years before his death. He is mainly remembered as a hymn writer, having written 1000+ hymn lyrics and tunes. One son, Solomon, a gifted linguist and theologian, became Vicar of Broadwindsor. About a dozen of his hymns appeared translated in the publication “Friendly visitor” (1826). He was an author, creator, composer, editor, correspondent, contributor, translator, owner, and performer.

John Perry
=================
Malan, Henri Abraham César. The family of Malan traces its origin to the valleys of Piedmont. A branch of it settled at Mérindol, in Dauphiné, but was driven from France by the persecutions that followed the Revocation of the Edict of Nantes. Pierre Malan [Cesar's father], after seeing his sister fall a victim to persecution, left Mérindol (1714), and arrived at Geneva (1722). Henri Abraham César Malan was born at Geneva in 1787. After an education at the College, he went to Marseilles, with the intention of learning business: but, soon after, entered the Academy at Geneva, as a preparation for the ministry, to which he was ordained in 1810. He had been appointed one of the masters at the College in the previous year. The National Church of Geneva was at that time almost Unitarian, and Malan's convictions were in accord with it. But the great movement known as the Réveil, of which the first products were the dissident church of Bourg de Four and at a later date that founded by Malan himself, and which finally imbued the whole Swiss Church with its spirit, was silently preparing itself. The germ of the movement may be traced in the Société des Amis (1810), of which Empeytaz and A. Bost were leaders; and in Malan's independent attainment to the doctrines of the Divinity of the Saviour and the free gifts of salvation through Him (1816). But the human agency, which gave it force, and determined its Calvinistic direction, was the visit of Robert Haldane (in the autumn of 1816), to whom not only these pioneers of the movement, but F. Monod, E. Rieu, Guers, Gonthier, Merle d'Aubigné, and others, always pointed as their spiritual father. Empeytaz and others sought to attain enfranchisement by the establishment of the "petite Eglise of Bourg de Four." Malan wished to reform the national Church from within: and a sermon at Geneva, which brought on him the obloquy of the professors and theologians that composed his audience, and which Haldane characterized as a republication of the Gospel, was his first overt act (Jan. 19, 1817). But the opposing forces were far too strong for him. The Venerable Company excluded him from the pulpits, and achieved his dismissal from his regentship at the College (1818). In 1820 he built a chapel (Chapelle du Temoignage) in his garden, and obtained the licence of the State for it, as a separatist place of worship. In 1823 he was formally deprived of his status as a minister of the national Church. The seven years that succeeded were the palmy days of the little chapel. Strangers, especially from England, mingled with the overflowing Swiss congregation. But (in 1830) a secession to Bourg de Four, and then the foundation of the Oratoire and the Société Evangelique, which in 1849 absorbed the congregation of Bourg de Four under the title of the Église Evangélique, thinned more and more the number of his adherents. His burning zeal for the conversion of souls found a larger outlet in long tours of evangelization, subsidized by religious friends, in his own land and Belgium and France, and also in Scotland and England, where he had friends among many religious bodies, and where he preached to large congregations. The distinguishing characteristic of these tours was his dealing with individuals. On the steamboat or the diligence, in the mountain walk, at the hotel, no opportunity was lost. On one occasion an old,man whom he visited drew from under his pillow a copy of his great hymnbook, Chants de Sion, 1841, and told him how he had prayed to see the author of it before he died.

It is as the originator of the modern hymn movement in the French Reformed Church that Malan's fame cannot perish. The spirit of his hymns is perpetuated in the analysis of Christian experience, the never-wearied delineation of the hopes and fears, the joys and sorrows of the believer's soul, which are still the staple of French Protestant hymns. To this was added, in Malan himself, a marked didactic tone, necessitated by the great struggle of the Réveil for Evangelical doctrine; and an emphatic Calvinism, expressing itself with all the despondency of Newton and Cowper, but, in contrast with them, in bright assurance, peace and gladness. French criticism has pronounced his hymns unequal, and full of literary defects; but their unaffected freshness and fervent sincerity are universally allowed. In the Chants de Sion, hymns 20, ”Hosanna! Béni soit"; 165, “Mon coeur joyeux, plein d'espérance"; 199, "Du Rocher de Jacob"; 200, "Agneau de Dieu"; 239, "Trois fois Jehovah," are in every Protestant French hymnbook; and several others are very widely used.

Besides his hymns Malan produced numberless tracts and pamphlets on the questions in dispute between the National and Evangelical Churches and the Church of Rome, as well as articles in the Record and in American reviews. He was a man of varied acquirements. His hymns were set to his own melodies. He was an artist, a mechanic: his little workshop had its forge, its carpenter's bench, its printing press. To the end of his life his strong Calvinism, and his dread of mere external union in church government, kept him distinct from all movements of church comprehension, though freely joining in communion with all the sections of Evangelical thought in Geneva and Scotland. At one time there seemed a prospect of his even rejoining the national Church, which had driven him from her. One of his greatest joys was the meeting of the Evangelical Alliance at Geneva (1861). He left no sect; one of his latest orders was the demolition of his decayed chapel, in which he had preached for 43 years. He died at Vandoeuvres, near Geneva, in 1864, leaving a numerous family, one of whom, the Rev. S. C. Malan, D.D., sometime Vicar of Broadwindsor, is well known as a linguist and a theologian of the English Church. To English readers Malan is chiefly known as a hymn-writer through translations of his "Non, ce n'est pas mourir" (q.v.): "It is not death to die", &c. About a dozen of his hymns appear in a translated form in the Friendly Visitor for 1826. [Rev. H. Leigh Bennett, M.A.]