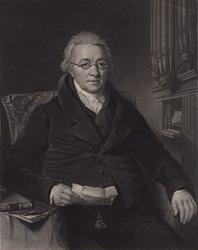 La Trobe, Christian Ignatius, eldest son of Benjamin La Trobe, was born at the Moravian Settlement, Fulneck, Leeds, Yorkshire, Feb. 12, 1758, and educated in England and at the Brethren's College, Niesky, Silesia. Taking orders in the Moravian Church, he became in 1784 Secretary to their Society for the Furtherance of the Gospel, and in 1795 Secretary to the Unity of the Brethren in England. He died at Fairfield, near Liverpool, May 6, 1836. He is best known through his Selection of Sacred Music, in six volumes, which appeared in 1806-25. His hymnological contributions consist of a few translations from the German. [George Arthur Crawford, M.A.]

Christian Ignatius Latrobe (12 February 1758 – 6 May 1836) was an English clergyman of the Moravian Church, as well as an artist, musician and composer. He created a large number of works for, and most famously edited, a Selection of Sacred Music in six volumes between 1806 and 1826, introducing the sacred music of Haydn, Mozart and Pergolesi and other European continental composers who were largely unknown to English audiences.
Wikipedia Biography
TextsTunesHymnals