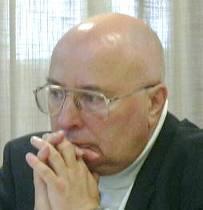 Albrecht Kronenberger, born January 21, 1940, in Würzburg, Germany, was one of the three editors of ADORU - Ekumena Diserva Libro. As a youth, lived in Pirmasens and Germersheim; studied philosophy and Catholic theology in Eichstätt (Bavaria), Frankfurt (Hesse), and Speyer, where he was ordained a priest in 1966. After serving as vicar in Frankenthal and Bellheim, he worked from 1969 to 2002 as a Gymnasium (secondary school) teacher of religion in Neustadt an der Weinstraße, where he has remained in his retirement.

Not long after learning Esperanto in the late 1980s, he began to be active in teaching Esperanto in his school and in celebrating Esperanto-language masses in connection with Esperanto conventions and in the cathedral of Speyer (every other month since 1991). In 1991 he also cofounded the Working Union of IKUE in the Speyer diocese, which was officially acknowledged and approved by the bishop.

Albrecht Kronenberger edited the 1,472-page ADORU together with Adolf Burkhardt and Bernhard Eichkorn. He typeset all its texts and music on his computer, as well as writing many texts and some melodies himself. The three editors were awarded the FAME Prize (a cultural prize of the city of Aalen and of the FAME Foundation) in 2002.

In the first few years of the third millennium, Kronenberger edited the new edition of the Esperanto Bible, which appeared in 2006. Beginning in 2007, he put all of the hymns of the Latin Breviary, many of them his own translations, into Vikifonto (the Esperanto version of WikiSource). He initiated and arranged "Kantoj post ADORU", a hymnal supplement published as a special issue (No. 1-3/2009) of Espero Katolika. Since 2009, in collaboration with Marius Gibbels, he has been working on a project (Projekt Deutsch-Esperanto) that aims to produce a truly complete online German-Esperanto dictionary.

The German-language church songbook "Gotteslob" contains one of Albrecht Kronenberger's compositions, a Gloria (#455).