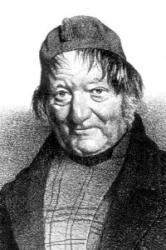 Trained as a teacher, Conrad Kocher (b. Ditzingen, Wurttemberg, Germany, 1786; d. Stuttgart, Germany, 1872) moved to St. Petersburg, Russia, to work as a tutor at the age of seventeen. But his love for the music of Haydn and Mozart impelled him to a career in music. He moved back to Germany in 1811, settled in Stuttgart, and remained there for most of his life. The prestigious Cotta music firm published some of his early compositions and sent him to study music in Italy, where he came under the influence of Palestrina's music. In 1821 Kocher founded the School for Sacred Song in Stuttgart, which popularized four-part singing in the churches of that region. He was organist and choir director at the Striftsckirche in Stuttgart from 1827 to 1865. Kocher wrote a treatise on church music, Die Tonkunst in der Kirche (1823), collected a large number of chorales in Zions Harfe (1855), and composed an oratorio, two operas, and some sonatas. William H. Monk created the current form of DIX by revising and shortening Conrad Kocher's chorale melody for “Treuer Heiland, wir sind hir,” found in Kocher's Stimmen aus den Reiche Gottes (1838).