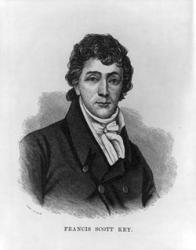 Frances Scott Key USA 1779-1843. Born in Frederick County, MD, and educated at St. John’s College, Annapolis, MD, a devout Episcopalian, he practiced law in Washington, DC for four decades. He was U.S. District Attorney for the District of Columbia until his death. He argued some of his cases at the Supreme Court. Key served briefly in a Georgetown militia unit. He married Mary Tayloe Lloyd in 1802, and they had eleven children: Elizabeth, Maria, Francis, John, Anna. Edward, Daniel, Philip, Ellen, Maria, and Charles. He also wrote a few hymn lyrics. During the War of 1812, which Key was against, the British invaded the U.S. and burned the White House, Capitol Building, and Library of Congress. One of Key’s friends, Dr. William Beanes, accused of helping in the arrest of British soldiers, was taken prisoner by the British. With the permission of President James Madison, Keys went to Baltimore to try to secure his release with a prisoner exchange. Sailing on a sloup flying a flag of truce for several miles at sea, they found the Tonnant, the ship Beanes was held on, and finally negotiated the release, After showing the British letters from grateful wounded British troups that had been treated by Dr. Beanes. They tried to leave the area, but were temporarily prevented, as the British were bombarding Fort McHenry. Major George Armistead, Commander of Ft. McHenry, had asked that a large flag be made so British vessels could see it over the fort from a great distance. The flag made of cotton bunting was 24 x30 feet in size. When hoisted, it looked huge. Detained, and watching from a ship about eight miles away, Key saw the British fail to destroy the Fort, or even the flag flying over it. The British could not move in cfloser with their ships, as close-range bombardment from Americans had already sunk 22 vessels. After firing 1500 bomb shells, each weighing as much as 220 lbs. from a distance of several miles out the British gave up trying. Key penned his famous lines about the incident, then finished the poem in a hotel room later. The poem was printed in newspapers, and soon a popular drinking tune, “Anacreon in Heaven”, by John Stafford Smith, was chosen to accompany it, and people began referring to the song as “the star-spangled banner”. Four stanzas were written, but usually only one verse, the first, is sung. Key’s brother-in-law, Joseph Nicholson, noted that Key’s words fit the song, so he took the poem to a printer in Baltimore and had it printed. Two known copies of the printing have survived. His famous song was sung in 1897 at baseball opening day ceremonies in Philadelphia. In 1899 the U.S. Navy adopted the song. In 1916, President Woodrow Wilson announced that it should be played at all official events. In 1918 it was sung during the 7th inning of the World Series . It was adopted as the National Anthem in March 1931. During WWII it was sung at every baseball game. Key was a slave owner for years, but an opponent of slave trafficking. He eventually became a leader of the American Colonization Society which sent freed slaves to Africa, and he freed his slaves, even giving free legal representation to some seeking their freedom. He also represented owners of run-away slaves. In 1841 Key became a member of President Andrew Jackson’s “kitchen cabinet” a group of informal close advisors that did not hold public office but met with the president from time to time. In 1823 Key helped found the Virginia Theological Seminary. He supported the Episcopal Church for decades, taking an active roll in Christ Church and St. John’s Church in Georgetown, and Trinity Church in Washington, DC. He served as a lay rector for many years, leading services and visiting the sick. Of his many poems, religious themes were frequent, and most of his works were printed, collected and published in New York as “Poems” in 1857. Key died in Baltimore, MD, of pleurisy. Honors include: two bridges names after him (in Arlington, VA & Baltimore, MD), St. John’s College auditorium, Inducted in Songwriter’s Hall of Fame, Key Hall at University of MD, a residence hall at George Washington U, a high school in rural MD, a middle school in Houston, TX, elementary schools in several states, a mall in MD, a Baltimore minor league baseball team, A San Francisco monument (torn down in 2020 by a radical group after a $140,000 renovation), a WWII Liberty ship, and a U.S. Navy submarine.
Special note: In 2001, after the 9/11 catastrophe in New York, Queen Elizabeth II allowed her guards at Buckingham Palace to play the song, and the next day, at St. Paul’s Cathedral, she joined in the singing of it at a memorial service.

John Perry
=================
Key, Francis Scott, was born in Frederick County, Maryland, 1779, and educated at St. John's College, Annapolis. He practised as a lawyer in Washington, District of Columbia, and was the United States District Attorney there till his death on Jan. 11, 1843. His poetical pieces, which were printed in various works, were collected and published in New York as Poems in 1857. His hymns in common use include:—
1. Before the lord we bow. National Thanksgiving. This Thanksgiving hymn for the 4th July was published in 1832, and was probably written for the celebration of that year. It is in use in Great Britain and America.
2. If life's pleasures charm [cheer] thee. The heart for God only. Appeared in The Christian Lyre, 1830.
3. Faith is the Christian's evidence. Faith.
4. Lord, with glowing heart I'll praise Thee. Praise for Pardon and Peace. Published in Dr. Mühlenberg's Church Poetry, 1823, the Prayer Book Collection, 1826, &c.; and altered as "Lord, with fervor I would praise Thee," in the Unitarian Hymns for the Church of Christ, Boston, 1853. In the Oberlin, Ohio, Manual of Praise, 1880, it begins with st. ii., "Praise, my soul, the God that sought thee."
Of these hymns Nos. 1, 2, and 4 are in the Lyra Sacra Americana, 1868, together with the following:—
5. Behold the grant the King of kings. All things in Christ.
6. My God, my Father, may I dare. God, the Father.
7. When troubles, wave on wave, assail'd. Efficacy of Prayer.
F. S. Key was also the author of "The Star Spangled Banner" (1814). For original text of his pieces see the Poems, 1857. [Rev. F. M. Bird, M.A.]