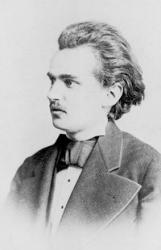 Hugo Richard Jungst Germany 1853-1923. Born at Dresden, Germany, he came from an affluent, middle-class merchant family, his father owning a factory and warehouse for French millstones. He received early piano lessons at age seven, and entered the Royal Conservatory of Music in Dresden for a six-year program of study, specializing in piano and composition. He studied with famous names of the time. In 1876 he founded the Dresden Mannergesangverein (men’s choir), which he headed until 1903. He was appointed Koniglichen (royal music director), and in 1898 royal professoir of music. He was an author, composer, and arranger known for carols, anthems, and music scores. He received several rewards in his lifetime, and perfomed internationally in Europe and America. He died in Dresden